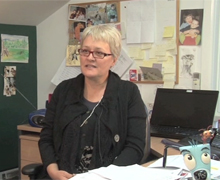 Gillian Carr and her company Moody Street Kids are producers of children’s television programs based in Melbourne. In 2009 Moody Street Kids received a Distribution Advance from the ACTF for their animated series Flea-Bitten! which had been commissioned by the Nine Network Australia. Gillian talks about the series and her reasons for approaching the ACTF with her series concept.