The band is composed of teenagers Arj, Barj and Larj. And now, thanks to the generosity of the Bröxstônian government, the Dukes are on tour, spreading their uniquely punk thrash sounds to an unsuspecting world!

In the original 10x45 second shorts, the Dukes made a Bröxstônia-sized impact screening at animation festivals in Australia, Korea and the UK.

Now in a longer series of three-minute episodes, we'll get the chance to enjoy more insane hijinks of Arj, Barj and Larj, as they brox-on!

The Dukes stay over in a spooky looking hotel. One by one, the Dukes are mysteriously brought to the hotel cellar. It turns out the hotel is run by a vampire, who wants the Dukes to join his band - forever. The vampire gives the Dukes instruments and looks at them hungrily - but soon, the Bröxstônian’s rough-housing antics turn the vampire off his dinner. He kicks the Dukes out. The Dukes return to the road - safe, but disappointed!

Larj is fed up with his old guitar, and kicks it out. He takes up a keytar (a keyboard guitar) instead. When Larj’s ex-guitar starts harassing Larj, he is forced to hire protection from Barj and Arj. As night falls, Arj and Barj leave their posts to talk to some fans - leaving Larj alone. The guitar strikes and chases Larj through the streets, driving a steam-roller. Eventually Larj and the guitar make up - leaving a jealous keytar to plot its revenge!

The Dukes are having photos taken for their new album cover. It’s a jungle-themed photoshoot, complete with wild animals and Tarzan-like costumes. When the photographer only shows interest in Larj, Arj thinks it must be due to his new, single chest hair. Arj and Barj try to remove Larj’s hair - using any means necessary. But every attempt only sees Barj becoming balder. Finally, Arj manages to remove Larj’s hair - with the ensuing rumble between the Dukes and the animals, it ends up making a fantastic photo.

The Dukes stop by a hamburger store, where Barj tries tomato sauce (ketchup) for the first time. He develops a passion for the red stuff - drinking it by the bottle. He devours so much, he starts to resemble a tomato himself! When his taste for tomatoes affects the band, the Dukes confront Barj. He runs away, forcing Arj and Larj to try out new drummers for the band. Finally, Barj sees the light, when he notices the ‘drummer wanted’ sign - and chooses the Dukes over tomato sauce.

The Dukes are zapped by a magical rattle, to a planet ruled by a giant baby. The baby wants the Dukes to be his minstrels, and makes them wear nappies and play baby instruments. The Dukes manage to tire the energetic baby out with music. They make their escape. The baby wakes up at the last minute and chases the Dukes out of his candy castle. The Dukes manage to get ahold of the magical rattle and use it to zap the baby – it explodes in Space, raining down candy. The planet is free again. The Dukes celebrate - until the baby’s stinky nappy falls on them.

The Dukes are in a rush to get to a concert. Barj is busting to go to the toilet - but Arj refuses to stop. When they arrive at the stadium, they discover their boy band rivals, the Lukes of Flökstônia, have taken over - with the help of a giant robot bouncer. The Dukes are forced to dress up as girls, in order to fool the robot. But the still-busting Barj gives their game away, when he tries to go to the boys' bathroom. The Lukes order the robot to finish off the Dukes - but, Barj can’t hold on any longer. The Robot is stopped (you’ll have to guess how) - and the Dukes are able to kick the Lukes off stage and rock the house!

Episode 7 Back to Bröxstônia

The Dukes are summoned back to Bröxstônia to play at the President’s daughter's birthday party. While the Dukes put on a great gig – the daughter isn’t into it. To liven things up, she sends in some huge wrestlers, who start throwing around the Dukes. It doesn’t look good for the Dukes, until their relatives help them to escape from the clutches of the wrestlers - and send the boys back to where they belong - on tour!

The Dukes are playing at an outdoor music festival with rides and stalls. Arj finds a stall selling a strength potion. He tries it out, and turns him into a massive, huge strongman. He decides to put on a strongman show, instead of playing with the Dukes. Annoyed, Larj and Barj replace Arj with a balloon - much to the bemusement of their fans. This works fine, until the balloon also takes Arj’s spot driving their van! The van ends up on the rollercoaster headed for doom, until Arj rescues them, his strength wearing off in the process.

The Dukes and their rivals, the Lukes of Flökstônia, are up against each other for ‘Best Band Hair’ at a music awards show. The Dukes win the award, but fight over who gets to hold the trophy. The ensuing struggle continues all night. The Dukes awake to find the trophy has gone missing! They naturally accuse each other, until Arj finds a telltale pink hair, left by the thieves. The Dukes bust into the Luke’s hair salon, and after a showdown with hair styling products, they manage to upset the Lukes and get their trophy back. To their delight, the trophy turns out to be made of tasty chocolate - and now the Dukes tussle over the last bite!

The Dukes do a sound check at a gig near a cemetery. Larj’s P.A. set up is so loud it wakes up the dead - literally! Soon, the Dukes are surrounded by music-loving zombies. Larj ends up falling in love with a zombie-girl. She’s gross, smelly and missing an arm - just Larj’s type! He splits with the Dukes to play in a duo with the girl. But the zombie-girl craves brains, and clearly Larj has none. When Larj gets jealous of his zombie-girl’s ways - he cracks it. All the zombies turn on Larj. At the last second, he’s rescued by Arj and Barj and they lead the zombies (Pied-Piper style) back to their graves with a rousing guitar solo! 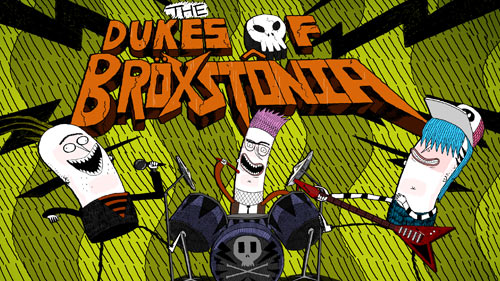 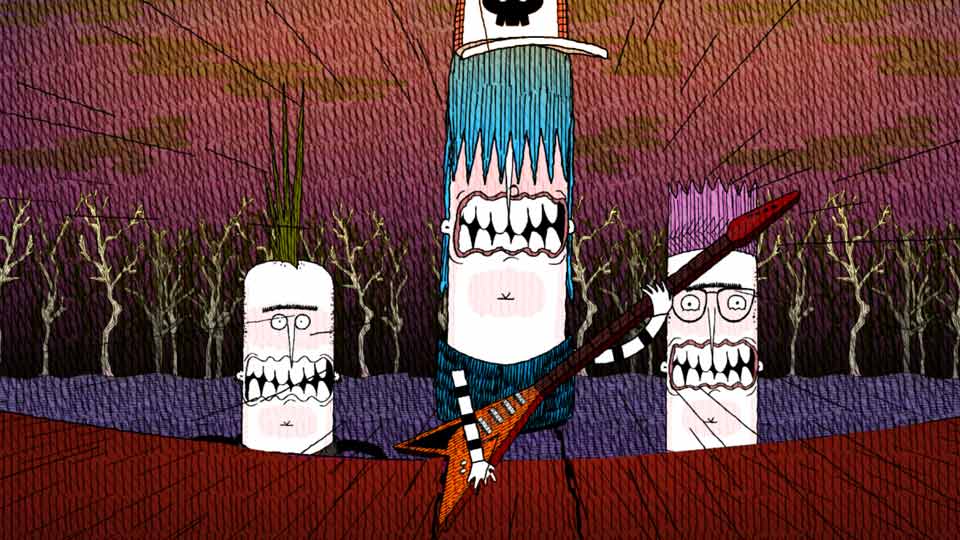 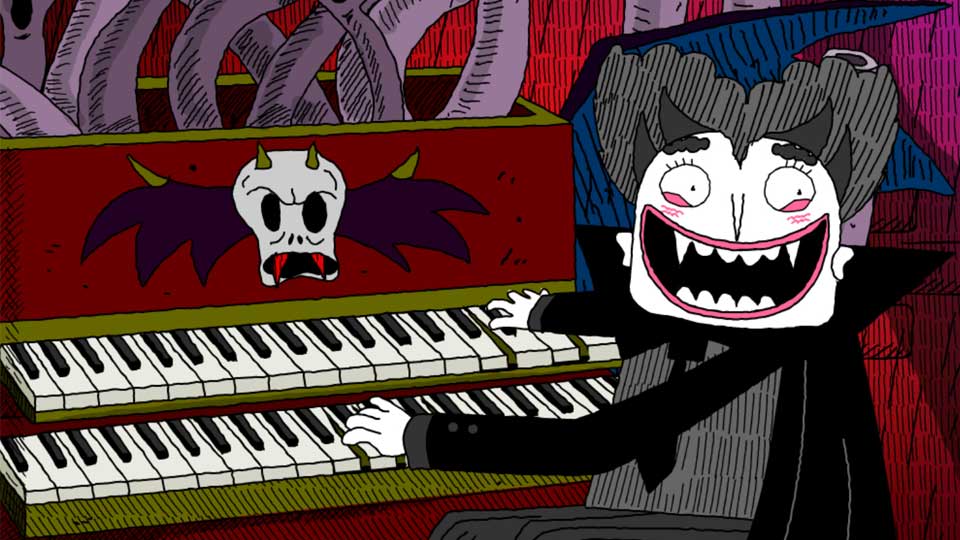 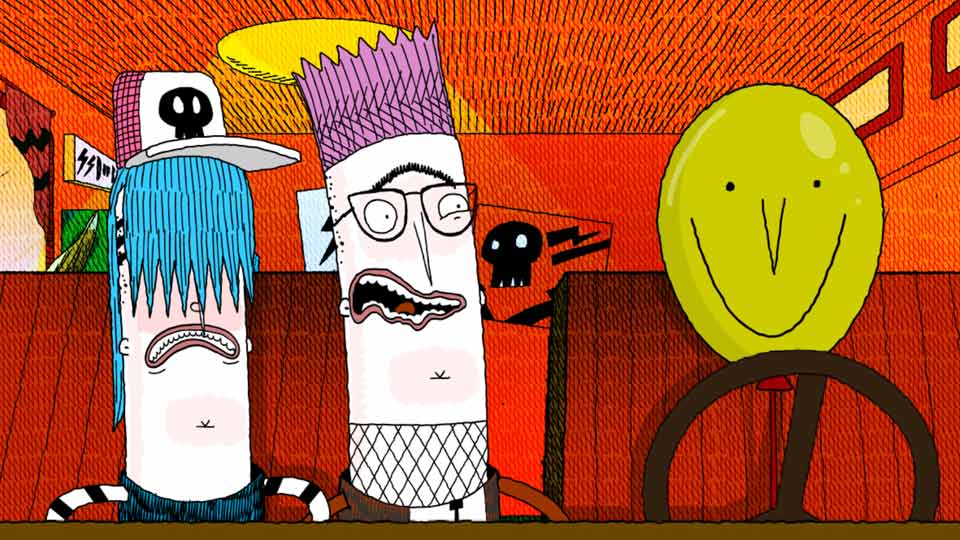 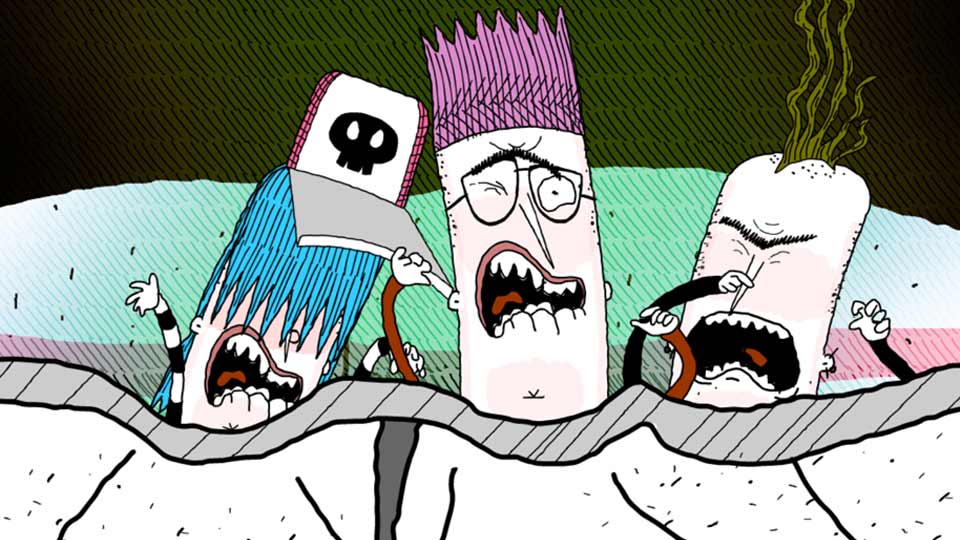 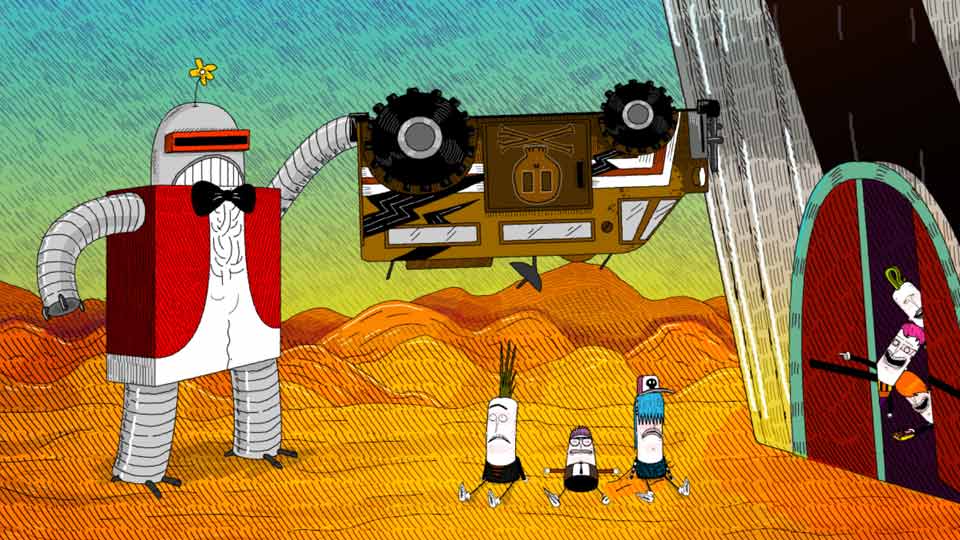 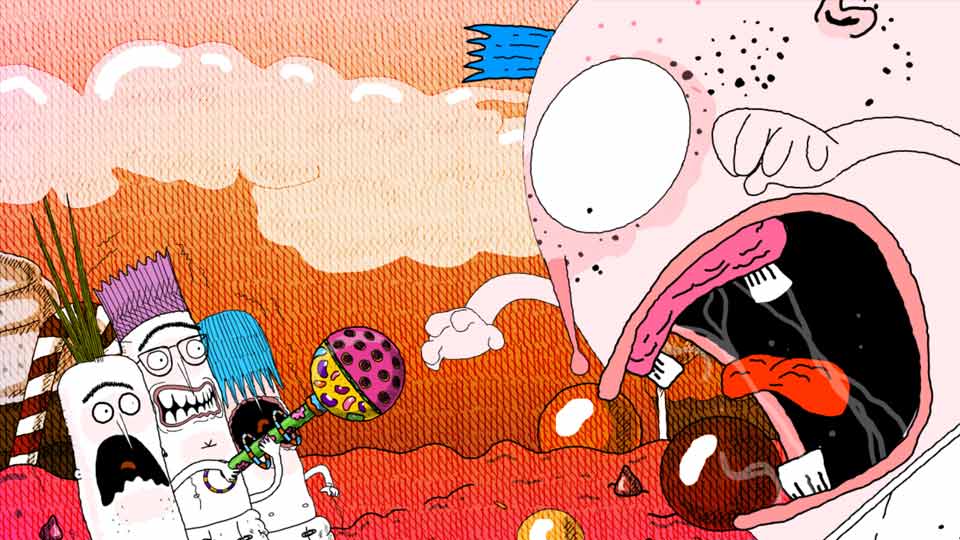 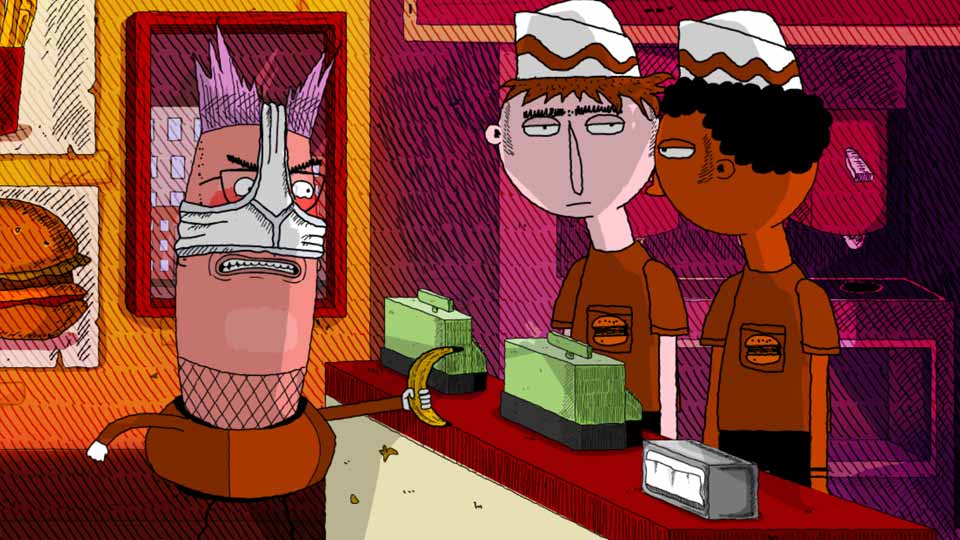 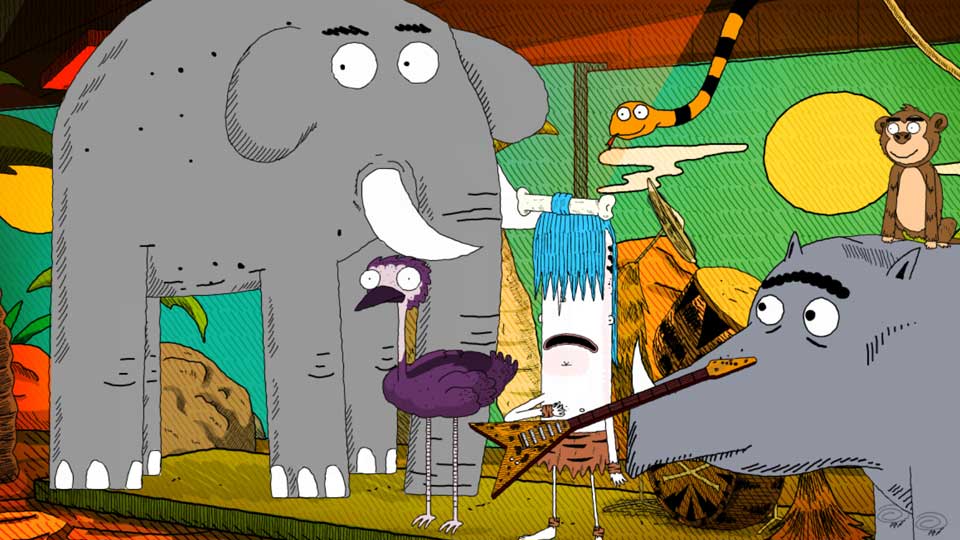 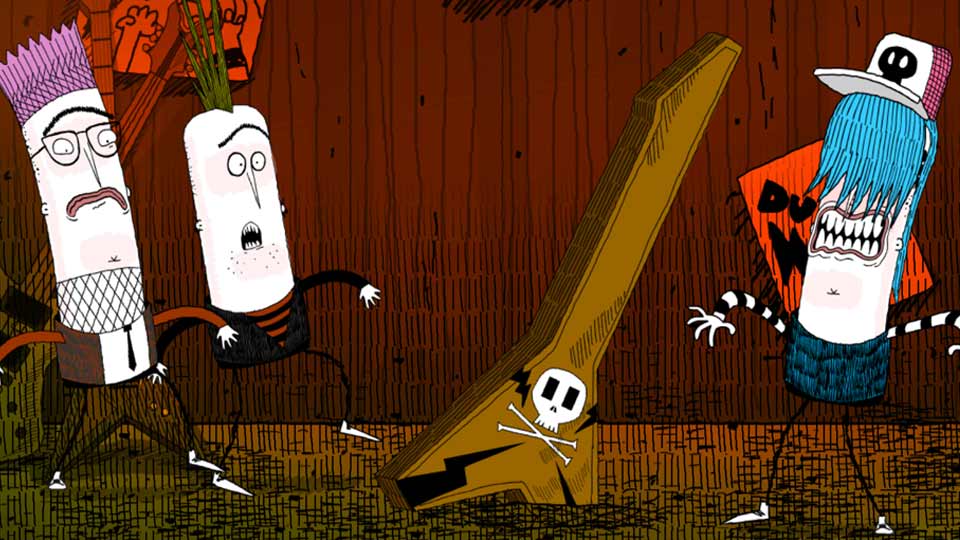