Michael, Kumiko, Gerard and Anna, last seen in Escape From Jupiter, are reunited on the Icarus, a solar cruiser that will take them back to their parents on one of Jupiter's moons.

But the journey is far from a smooth one. Danger and excitement wait around every turn, as the children face a crash landing on Mars, hitch a ride on an asteroid, and race against two villains, whose evil plan jeopardises the Icarus and its crew. Return To Jupiter is more than a science fiction adventure – it combines excitement with humour, as the children learn to overcome adversity with courage and imagination.

Kumiko, Michael, Gerard and his sisters, Anna and Samantha, are on their way to rejoin their families on a mining colony on Ganymede - one of Jupiter's moons. Inside Earth Station II, Gerard's virtual reality simulated rescue mission goes terribly wrong, when the rope suddenly rips from the rock face. His cadetship as a flight ensign is in jeopardy. Kumiko longs for further adventure, but gets more than she bargains for when the three friends are left hanging in space after the propulsion system fails on Gerard's space tourer. They find themselves in the path of an asteroid damaged ore carrier, on a collision course with the station - and they're the only ones who can save it from certain destruction!

As the Icarus prepares for launch, the crew discovers a strange atmospheric contamination aboard the ship. When Michael attempts to shut down the infected atmospheric enhancer, he is quarantined in a decontamination tube with the unidentified space bug. If his medical tests aren't completed, he won't make it aboard in time for take off! With only seconds remaining, Michael gets the all clear and races to rejoin the ship. Meanwhile, Abraham, fearing the Icarus is a new Titanic, wants to get off the ship and races for the exit - only to be trapped in the cargo hold.

The Icarus is on its way to Mars! Abraham is hiding out inside the garbage unit. He swears Anna to secrecy, but Gerard has his suspicions. If he can hide out until the ship reaches Mars, they won't be able to send him back! Suddenly, a computer malfunction puts the ship off course. With communications and navigation down, the crew of the Icarus brace themselves for a crash landing on Mars. The crippled spacecraft speeds through Space, hurtling dramatically towards the planet's surface.

The kids survive the crash on Mars, bruised but unhurt. The ship is badly damaged and needs extensive repairs. Gerard and Anna's sister, Samantha, is seriously injured, and Anna decides to remain behind with her. Michael and Gerard volunteer to cross the inhospitable and dangerous Martian landscape to get help at a old hydration plant nearby. With only three hours of light, they risk being caught on the planet's surface after dark and freezing to death. After overcoming the perils of the Martian terrain, they arrive at the hydration plant - to be confronted by two strange looking locals, Petra Glovic and Tobias Selby.

Michael and Gerard travel with Glovic and Selby aboard their terrain vehicle, back to the injured ship. Selby and Glovic are keen to assist with repairs using their state-of-the-art computer, but they require unlimited access to the ship's programs. Abraham is almost run down by a dune buggy, driven by tough, young Martian feral Zac, accompanied by her complaining robot, Quadro. They return to the Icarus to fix her buggy. Kumiko begins to suspect that the ship may have been sabotaged via the cybernet. Zac dares Abraham to go with her to the haunted Martian caves to look for alien bones, only to find themselves imprisoned by force fields. With the sounds of a terrifying alien heading toward them, their robot stumbles across the desert to get help.

While the Icarus repairs proceed, Michael and Gerard come across Quadro as they search for the missing kids on Zac's dune buggy. Zac and Abraham venture further into the cave, where Abraham is saved by Zac from drowning in a sinkhole. Zac confronts the beast of the cave to find it is nothing but a futuristic scarecrow. Meanwhile, Kumiko has developed a chip to track the hackers and she is beginning to suspect Selby and Glovic. The cave which hides their expensive equipment is guarded by a fake alien, and they seem anxious to get hold of Gerard's list of all the Icarus cargo. Did they crash the ship? With blast off just forty eight hours away, the three friends decide to find out more about the mysterious locals.

Kumiko and Gerard arrive at the hydration plant to check up on the mysterious pair. They find evidence that the two are planning a long holiday in the near future. Meanwhile, Selby and Glovic, suspecting they have been discovered, question Zac about the whereabouts of the others, and threaten to torture Quadro. Zac is forced to talk and the villains set off after the children, while the kids plot to delay their departure. Humiko suspects them to be computer saboteurs running a black market for space cargo. She traces the signal to their hydro plant, only to be discovered by the conspirators! Gerard embarks on heroic rescue mission to save her, but Selby and Govic throw them in a sink hole to drown, leaving Michael to rescue them. With time running out, the friends race back to the ship in a dramatic dune buggy chase. Dent is about to leave without them. The kids brace for takeoff, believing that they are finally free of the two space pirates.

The Icarus grows from a black dot against the red planet Mars, disappearing into the blackness of Space, on course for Ganymede. Then an alarm rings out! The ship is flying blind. Still determined to get the cargo, the villains have planted a computer virus and malfunctions are occurring all over the ship. Zac believes its all her fault, that she is jinxed and plans to pack herself into a crate and jettison herself off the ship. Unable to get the cargo on Mars, the pirates instead isolate the ship without scanners or fuel, and have programmed it to jettison its fuel rods and cargo pods. Kumiko is ordered to stop the virus. With three cargo pods already gone, Gerard smashes the cargo control panel with his sledge hammer. But now the ship is about to collide with an asteroid!

An asteroid called Pallas is hurtling toward the stranded Icarus. If the ship can get alongside and attach itself with cables, it may be able to get out of its predicament. But once hooked up and using the asteroid's elliptical orbit to slingshot itself towards Ganymede, it cannot stay connected too long to the asteroid, or it will be destroyed. Gerard places himself in grave danger, when he must decide between cutting the cable tethering the ship to the asteroid or using up the last of the fuel, leaving him stranded. With Gerard hurt, Michael cuts the cable. The thrusters ignite and the Icarus speeds away. Did Michael manage to get himself clear before they fired the thrusters next to the cable bay?

Michael is discovered in the garbage unit and submits less than reluctantly to Kumiko giving him mouth to mouth. The kids make their way to the transit shuttle. They have finally reached their destination of Ganymede. Kumiko is annoyed that she and Gerard are soon to part company. The Icarus is framed against the giant planet Jupiter, and the crew on board prepare to make their long-awaited landing on its moon. But the mining colony is deserted and Swelby’s ominous “Spyder” craft is in the hanger. Zac and Abraham pelt the villains with food, while Kumiko plants a surprise in the computer controls and steals their computer. Selby attempts to bargain with the kids. He tells them that the colonists are on Terminex, the research station above Jupiter. The station was abandoned because a comet was on collision course with Ganymede. But secretly, he plans to take legal possession of the abandoned Icarus. As both sides destroy each other’s only way off the moon, Selby is forced to propose a deal. If they don’t help each other, they’ll be toast within 11 hours!

The Comet hurtles through Space. Selby proposes a deal. He will tell them where fuel rods for the Icarus are, if they will help him get off the station. But Commander Dent doesn’t agree, saying when they get to Terminex, she will hand the pair over to the authorities. Quadro keeps guard over the two prisoners. Gerard and Commander Dent become trapped in a sabotaged lift capsule. Trapped in the lift, she confesses to Gerard that a long time ago, she attempted to save a friend, before losing her ship - and lost both. Meanwhile the villains use a magnet to fry Quadro’s circuits and escape. Dent and Gerard make it to the mining rig and blast off, the others leave on the shuttle. Selby and Glovic are left behind, as the runaway comet hurtles toward them. The Icarus blasts away from Ganymede with the mining rig and its precious fuel still attached. Then an SOS signal comes from Terminex!

Terminex is in danger. Dent leaves the kids on board the disabled Icarus and the crew flies to the rescue in a small, fast mining rig. Gerard is now in command. For the next two days, the ship is his. Late at night, he wakes his friends. The Icarus has visitors! The indestructible Selby and Glovic! The space pirates have a cyber link, and threaten to sabotage the controls on Dent’s ship - unless the kids turn the Icarus over to them. Gerard’s career as a flight ensign will be in serious trouble if Commander Dent returns and finds the whole ship missing! Selby and Glovic sent the false SOS and had planned to lure everybody off the ship. They get away with their spoils, before being picked up by scanners on Terminex. Now the kids hatch a plan of their own. Kumiko sabotages the thrusters, and when the villains ignore her warning and attempt to blast off, there is a tremendous explosion. Selby and Glovic are forced to abort their escape, before they destroy the Icarus.

The Icarus, with Selby’s space craft attached, hurtles through space on an accelerated collision course towards Terminex. Gerard must destroy the ship before it crushes into the station, causing certain disaster. The villains are locked away, but the precious cargo must be saved for the colonists. Kumiko takes Abraham and Zac into the tiny cockpit of Selby’s spacecraft and continues alongside, leaving Quadro, Michael and Gerard on board to set the explosives and begin the countdown. Just before the ship explodes, two pods are jettisoned from the doomed space craft and float safely away. One contains the two friends and the other the unhappy Space Pirates. On the Space Station, Gerard and the others are commended by Commander Dent. One day Gerard will make a fine commander. The Icarus explodes in a fiery display, but the pods are safe. As younger kids celebrate the end of their ordeal and their reunion with their parents, the others are already planning their future careers in the new frontiers of Space. 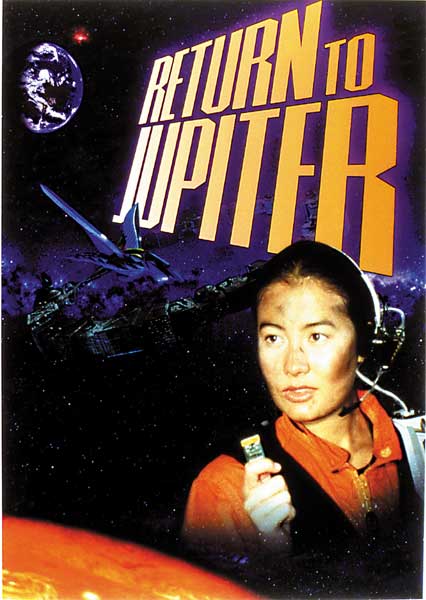 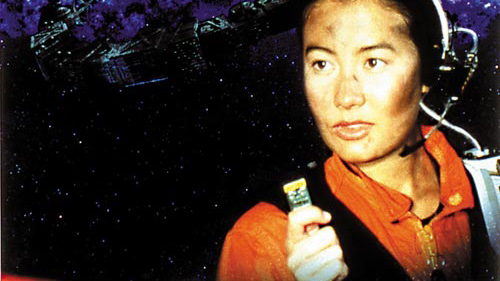 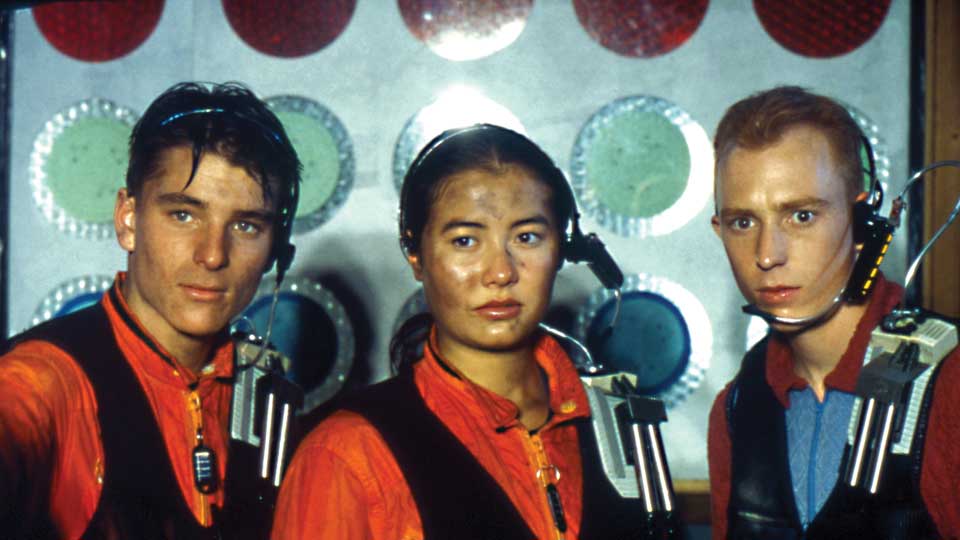 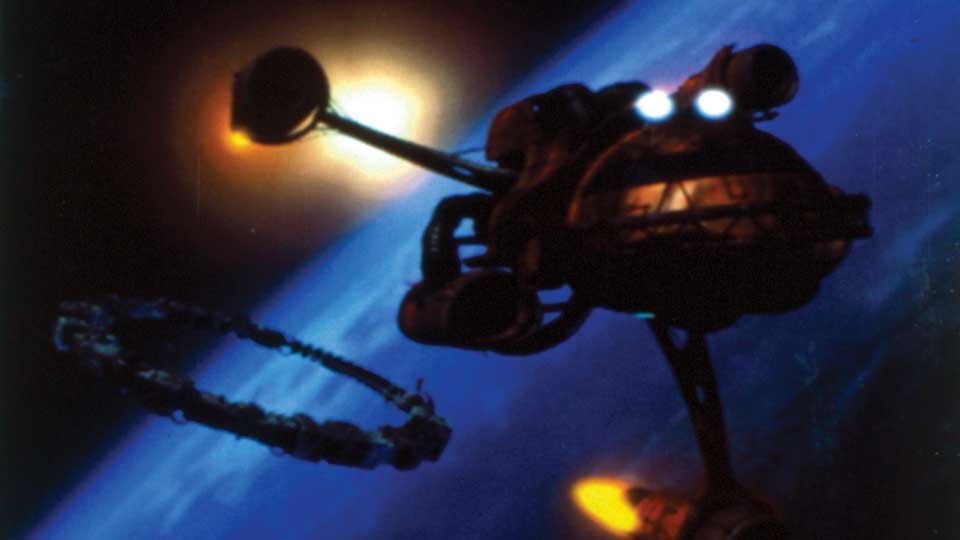