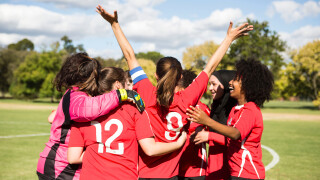 Mustangs FC is a goal kicking comedy drama about girls who are abandoning the sidelines and starting their local football club’s first all female team.

Back together again for a new season, the Mustangs are confident and hungry for some silverware... But can they win without Ruby?

The Mustangs need to get serious before the season officially starts - time for some unusual training methods, player recruitment, and a big shake up of the team's formation.

Marnie struggles to accept her new position in the team, while an injury forces Lara to face giving up dreams of gym glory.

Bella ends up in a spiral of self doubt after missing a goal - and everyone's opinions on how to help her only make it worse.

The grudge match against the Wildcats has everyone feeling the pressure, especially Marnie, who develops some obsessive pre-game rituals.

Marnie is forced to play friendship umpire when a team night watching soccer gets turned into a pity-party for heartbroken Liv, and Ruby's unexpected appearance divides the girls.

Marnie and the team campaign to get sanitary bins for the Mustangs clubhouse, while Anusha struggles to find the balance between independence and the support she needs.

Episode 8 You Do You

Marnie has been keeping a secret from Liv and when it emerges, Liv questions whether soccer is really her passion.

Playing in a skills camp with the best in the league, Marnie gets a wake up call - she's going to have to work a lot harder for her dream than she'd realised.

Episode 10 Seven and Half Minutes

Marnie desperately wants to get scouted but to do that, she has to persuade Anton to let her play with the boys. And miss half of the Mustangs crucial semi-final.

After spying the Wildcats bullying Ruby, Anusha gets carried away with a plan to take action. But Ruby stands up for herself.

The looming final against the Wildcats is sending everyone a bit crazy. Have the Mustangs got what it takes to finally win the trophy?

The penalty shootouts are nail-bitingly close but even after the whistle blows and the final score is announced, there's still one last surprise in store for the Mustangs.