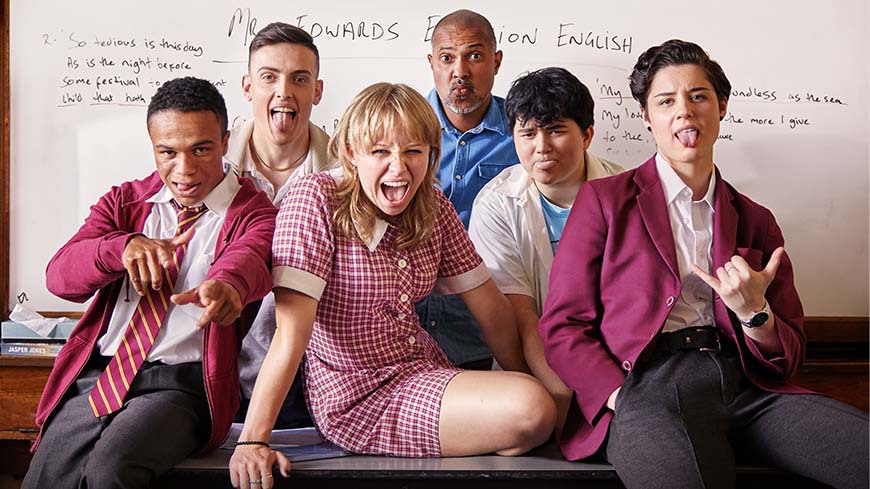 The Australian Children’s Television Foundation (ACTF) and Paramount+ are excited to bring audiences the ground-breaking six-part series More Than This.

Written and co-created by teen actor Olivia Deeble, More Than This is the real, authentic and often raw story of five 17-year-old students and their teacher whose diverse worlds collide when they are thrown together into a Year 12 English class.

More Than This was created by Olivia and co-created by Luka Gracie, an 18-year-old trans non-binary actor and filmmaker. They both star in the series alongside a talented cast including Kamil Ellis (Nowhere Boys), Ellmir Asipi (Neighbours), model/actor Josh Heuston (Dive Club), Oisin O’Leary (Little Lunch), Celine Ajobong (Mustangs FC), Tharanya Tharan (Mustangs FC) and newcomer Selena Brincat, along with theatre and television regular Bert Labonte as their teacher.

Olivia, who is best known for her roles on Little Lunch, Home and Away, and Disney feature film The Secret Society of Second Born Royals, is an exciting new writing talent.

She began writing the series when she was just 17 and completing Year 12 during Melbourne’s lockdown.

She said: “I had auditioned for and watched hundreds of high school shows and they were all the same. None of them were telling anything near my truth or experience, so I wanted to make something authentic. I asked my friends what they would want to see on screen and the answer was ourselves: real teens and not shiny, airbrushed versions of teenagers played by 25-year-olds with adult bodies and adult confidence.

“I am really proud of More Than This. I feel like the characters, words and story are our own, and it is a realistic depiction of how Australian teenagers feel while still being a great series with a whole lot of characters you can fall in love with.”

The series is produced by television veteran Kate Gorman and directed by Kate and John Sheedy (H is for Happiness).

Kate said: “More Than This has found the perfect home at Paramount+. This show is breaking new ground, having been created by teens and telling stories from their point of view. It has been such a pleasure to work with the very talented cast and see their individuality, uniqueness and passions brought together in this amazing series. I can’t wait for the world to meet this young cast and fall in love with the diverse characters they have created.”

Executive Producer Bernadette O’Mahony said: “Olivia is an exciting new creative force. We loved her in Little Lunch at 12, and now at 18 to have written a drama series of this quality with such complexity we knew we had to support it. It is a unique, world-class drama series for a young adult audience, written by those living it. The authentic voice of Olivia and Luka’s stories and their characters hook you in, along with the fabulous cast who all had their own input and own experiences to bring to these roles. We know it’s a series that teens and young adults will relate to and are thrilled that Paramount+ love it as much as we do.”

Daniel Monaghan, SVP Content & Programming, 10 ViacomCBS, said: "We are thrilled to have partnered with ACTF to bring the incredible drama More Than This for Paramount+. It is a sensational series with an extremely talented, creative, and young cast that are a force to be reckoned with. We are so pleased we can showcase these unique Australian stories, by such a talented Australian team."

ACTF CEO Jenny Buckland said: “The ACTF received additional Commonwealth funding this year and it’s enabled us to do so much more. Australian teens have missed out on having their own stories on screen, so we’re thrilled that Paramount+ and Ten have helped us move into a new area. It’s the beginning of a new chapter for us, and audiences can expect to see more teen content supported by the ACTF.”

More Than This will premiere on Paramount+ in early 2022.

More Than This is a Baby Banksia production, produced with the assistance of Big Finish Creative, Shapeshifter Studios and the Australian Children’s Television Foundation. It is produced by Charmaine Gorman and Kate Gorman and executive produced by Jason Haigh-Ellery, David Devjak and Bernadette O’Mahony. Directed by John Sheedy and Kate Gorman. Written and created by Olivia Deeble and characters created by Olivia Deeble and Luka Gracie.