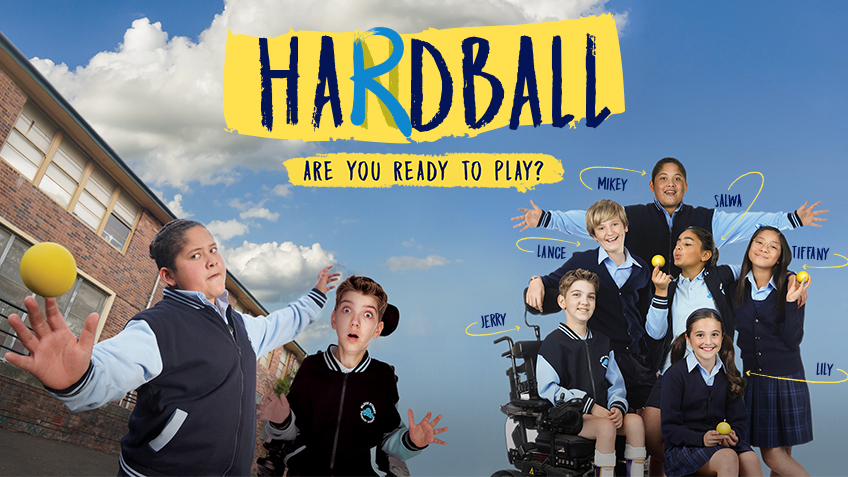 Northern Pictures’ first foray into live-action drama for the 7-11 audience – Hardball (13 x 24 min) - will premiere on the ABC Me App on April 1. Distributed internationally by the Australian Children’s Television Foundation, Hardball is the brainchild of creators Guy Edmonds and Matt Zermes.

Hardball is a fresh, fish-out-of-water story about New Zealand boy, Mikey, who moves to Western Sydney and finds himself in the thick of the ultra-competitive, schoolyard game of handball. Rocking into school with the most powerful serve the neighbourhood has ever seen, Mikey is befriended by Jerry and Salwa, who join forces to train him to become a weapon of precision and skill - equipped to topple resident king of the court, Tiffany, and take home the western suburbs handball crown. A comedy with a huge heart, this underdog story explores themes of multiculturalism, inclusion, family and friendship.

Led by Northern Pictures Executive Producer Catherine Nebauer and produced by Joe Weatherstone, Hardball was created by Guy Edmonds and Matt Zeremes. Hardball is the duo’s first foray into children’s television, bringing their own love of fast-paced, action-driven humour to the series. Matt and Guy also cameo as Tiffany’s dads, Steele and Stone, in the series.

“Ultimately, we wanted to create a show that doesn't just play for kids. It needs to be a show that any family member can sit down and watch with a child and be as engaged as the kids are,” Edmonds says.

Hardball truly reflects Australian communities, which like so much of the world, is made up of a diverse mix of cultures, and with children moving around more, whether it’s within their own country or moving to a new country, it reflects many kids' experiences of starting again in a new home and finding your place, your passion, your friends. All with a sense of humour!

Erin Choy, who plays Mikey’s nemesis and teacher's pet, Tiffany, had this to say: “I think it's great how there's lots of diversity: we’ve got Tiffany from an Asian background, Mikey is a Kiwi and Salwa, she's Lebanese. We've got a whole range/mix. I think it's great that all of the kids are mixing well together and that they can become friends. It doesn't matter about race and things like that.”

“Hardball is seriously funny, and Guy and Matt have tapped into a sport every kid knows how to play, whether they call it handball, four square or something else – it’s universal – and the audience will all want Mikey on their team. It’s a series with real warmth to it – these characters have such great friendships and ways of dealing with life’s ups and downs.” Bernadette O’Mahony – Executive Producer, ACTF

“For Northern Pictures, there was never any doubt who to approach about both further developing and then distributing our first comedy series, ACTF was always top of mind. Bernadette and the team there absolutely understand what we, as producers, need to deliver to the local market, as well as for the international marketplace. We are delighted to be working with the ACTF who have been instrumental in helping us craft the series,” said Catherine Nebauer, Executive Producer, Northern Pictures Pty Ltd.

Hardball will have its world premiere on ABC Me on April 1 in Australia. Hardball is produced by Northern Pictures, financed with the assistance of Screen Australia, Australian Children’s Television Foundation, ABC Television and Create NSW.

Get ready to play! There’s a new challenger in town!