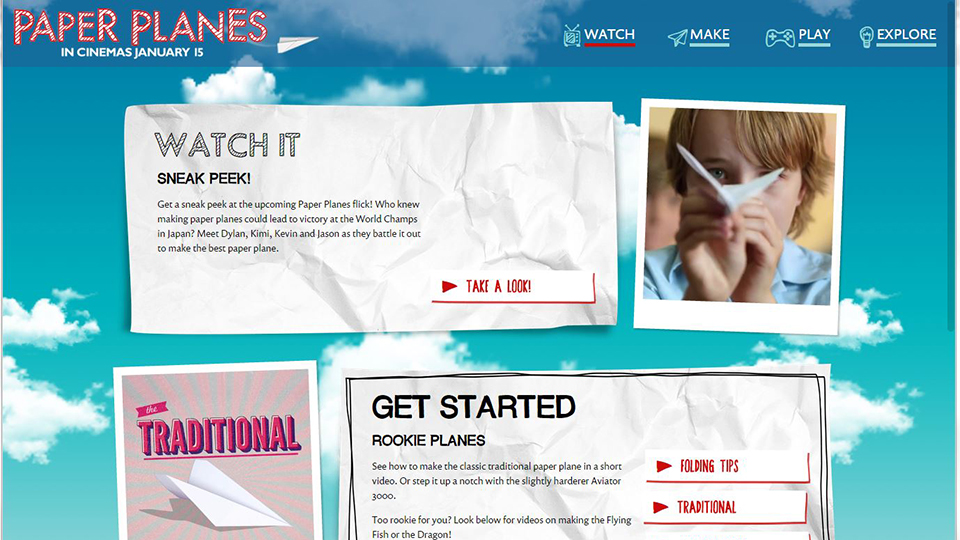 Soar into summer with the new Paper Planes website!

Coming to cinemas 15 January, Paper Planes is an imaginative children's film about a young Australian boy's passion for flight and his challenge to compete in the World Paper Plane Championships in Japan.

At the Paper Planes movie website kids can WATCH a sneak peek of the upcoming flick, MAKE their own paper planes using expert ‘tips and tricks’, PLAY cool games, EXPLORE the film’s characters, and meet the real paper pilots behind the scenes.

Throughout December, the Paper Planes website will be rolling out way more stuff for kids including games, videos and a Flappy Plane!

For the ‘bigger kids’, the website features BORING GROWN UP STUFF, an additional section featuring content for teachers and parents - from how to make school group bookings and lesson plans for teachers (Prep to Grade 6), to folding tips and short instructional videos to help kids (both younger and older) make planes either at home or at school.

“The children LOVED it (and so did the adults)! It was absolutely fantastic to be able to have them experience a quality AUSTRALIAN film. There were so many great messages to take away about resilience, persistence friendship and learning.", said teacher Amanda.

Paper Planes was also reviewed by Margaret Pomeranz and David Stratton on the finale of their television show At the Movies.

“I think it deals with a lot of issues for young people in a really good way,” said Margaret, who gave the film 4 out of 5 stars. “This is an Australian film that people are going to enjoy and I urge you to go and see it because it’s lovely, it’s really lovely, and it’s opening at the perfect time.”