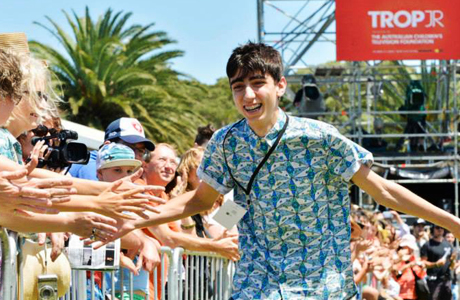 Fourth-time Trop Jr entrant and first-time finalist, Adrian Di Salle has won the world’s largest short film festival, for kids by kids, with his short film The Adventures of Lucy.

The 15 year old film maker is in his last year of being eligible for Trop Jr and won the judges over with his fantasy animation about a girl made of paper in a paper dream world.

In addition to receiving industry exposure, Adrian was awarded a monster $5,000 cash prize.

Oliver Levi-Malouf won second prize for his short Penelope’s Penguin and third prize was for awarded to Conor Jamison for his film Eyes.

Hundreds of film fans and their families rolled out picnic blankets in Centennial Park to enjoy a beautiful day of sunshine, entertainment and the 16 finalist films on the big screen.

The ACTF is the presenting partner of Trop Jr, for more information visit the official Trop Jr website.