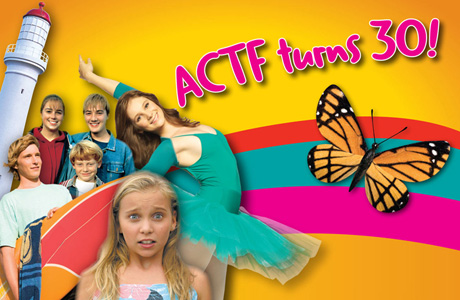 Our anniversary coincides with the handing down of the final report of the Commonwealth Government’s Convergence Review, which will recommend transforming the way Australian content, including children’s content, is supported and regulated in a convergent media future.

The history of children’s television regulation and the ACTF are inextricably linked. ...

As early as 1972 however, the Children’s Television Advisory Committee was highly critical of the standard of programs being produced and screened for children and suggested the Government should consider establishing an independent Foundation to produce programs especially designed for children.

In 1977 the Australian Broadcasting Tribunal conducted an inquiry into the Self-Regulation of Broadcasting. The Tribunal received 539 written submissions and held public hearings all around the country. The standard of children's television programs dominated the evidence - the general theme being that children’s programs were unimaginative and low budget, and that much of the content screening in children’s viewing times wasn’t specifically designed for children.

So the “C Program” classifications were introduced in 1979 as a direct outcome of this community concern.  They ensured minimum amounts of age specific, quality children's programs on commercial television.

...When these regulations were first introduced The Age editorialised on 22 May 1979 that they were:

"... a tentative move in the right direction ... For too long, children have had few alternatives to imported, mindless cartoons and repeat screenings of programmes originally made overseas for the adult evening market ... The new guidelines provide an opportunity at least partially to satisfy children's needs and curiosities, instead of using television as an unpaid, unchecked baby sitter. The chance to give them better television should not be wasted."

Without these regulations the children’s television production industry, of which we are so proud today, would not have existed.  But these regulations were not supported by broadcasters and they did not, on their own, produce results.   Over the first few years it looked as though the production of magazine style after school programs, followed by imported children’s programs, were all that screened.  As a result, the Children's Drama Sub-Quota was first introduced  requiring  broadcasters to screen a minimum number of hours per year of first-release Australian children's drama.

In 1984, the year of its introduction, the drama sub-quota was 8 hours per year. Now, it is 96 hours of first release Australian children's drama over a three year period, which is an average of 32 hours of children's drama, per broadcaster, each year.

In 1978 the Senate Committee on Education and the Arts published a report on the Impact of Television on the development and learning behaviour of children and recommended the establishment of a Children's Television Program Production Unit, funded by Government.

...In 1979 Dr Patricia Edgar was the Chairman of the Children’s Program Committee of the Australian Broadcasting Tribunal, which was classifying the first C Programs that were coming through.  It was an enormously difficult period during which there was constant tension between the broadcasters and the regulator over classification of children’s programs.  Dr Edgar became convinced that regulation by itself would not create outstanding programs.  In 1979 she presented a paper in which she outlined what she thought needed to happen to ensure quality children’s programs were produced in Australia.  The paper was read by Victorian Minister for Arts and Educational Services, Norman Lacy.  He too, had been thinking about children’s television, and the two of them joined forces to work on a proposal to establish an Australian Children’s Television Foundation that went to a meeting of all of the Ministers of Education in Australia in June 1980.

Patricia Edgar and Norman Lacy worked tirelessly to establish the ACTF, and had many supporters who played key roles including John Morris, Anne Gorman, Dame Beryl Beaurepaire, John Stapp and Frank Meaney.  It was established as a unique organisation, with funding from all of the states and territories (excepting Queensland in the early years) and the Commonwealth.  Patricia led the ACTF for two decades.

When the ACTF was incorporated in 1982, as a catalyst to improve the quality of children’s television, the children’s television industry itself was fledgling, working on a handful of studio based magazine style shows such as Shirl’s Neighbourhood.  The leading writers, directors and producers of Australian drama weren't thinking about children's drama.  The ACTF vision was to change all that. ...

"To bring together a group of our country’s leading and proven talent for the purpose of producing high quality children’s television is clearly a worthwhile endeavour… one can reasonably expect this project to achieve a standard equal to the best that has or can be produced in Australia for Australians."

ITC went on to sell the Winners telemovies to more than 70 countries and they won numerous international awards, demonstrating what could be achieved with resources and talent.

The ACTF would follow up Winners with other major projects through the 1980s and 1990s including Touch The Sun, which won an International Emmy Award, four series of Round The Twist, which is one of the most successful children’s drama series ever made anywhere, and Lift Off.  These programs would be screened in Australia and then sell all around the world.

The Film Finance Corporation (FFC), established in 1989, became a significant financier of Australian children’s drama, and during this period a vibrant children’s television landscape was developing alongside the ACTF, with producers all around Australia.  Yoram Gross, who created Australian animation feature films – beginning with Dot The Kangaroo in 1977 – moved into long form animated television production with the Blinky Bill series in the early 1990s.  Live action producers including Jonathan Shiff and Ron Saunders created series like Ocean Girl and Spellbinder that attracted considerable followings both in Australia and internationally.  Australian children’s drama was unique.  No other country had a “children’s drama quota” or enjoyed similar levels of funding support, and it found a ready international market, especially in Europe.  As a result, our children’s television production industry is now world class.

Over the last 10 years the ACTF has changed its focus from the production house model, to one where we work and collaborate with independent producers all over the country, assisting other producers to make quality Australian content.  We called this shift a move from "making it" to "making it happen."  ...

The ACTF provides its assistance through development investment, distribution and co-production partnerships.  This approach has allowed us to stretch our funding (which is significantly lower than it was in 1982 in real terms) much further.  We are able to generate considerably more Australian content now than ever before, and to work on a much more national basis, with producers and productions all over the country.

Mortified with ACTF and Enjoy Entertainment (which was the most awarded children’s drama series in the FFC’s history); Lockie Leonard 1 & 2 with Goalpost Pictures; My Place 1 & 2 with Matchbox Pictures and Dance Academy 1 & 2 with Werner Film Productions.

The media and social landscape has changed dramatically since 1982.

In 2006 the ACTF publically highlighted the opportunity afforded by the switch to digital television to provide a better media service for Australian children.  We called for the establishment of a dedicated digital public channel for children. ...

The vision was for a distinctive, comprehensive, children’s public service channel which is predominantly Australian and available to every family that can receive digital free to air television.  We imagined a new and innovative service which included a diverse slate of programming including news, educational programs, as well as entertaining children’s drama and non-drama programs.  Ultimately the ACTF joined forces with the ABC to champion this idea, and the outcome was the establishment of ABC3 in 2009.

Over the first three years of ABC3’s life we have therefore been delighted to support a sitcom (Mal.com), sketch comedy (You’re Skitting Me), a documentary series (Dancing Down Under) and a series in which Indigenous performer Brandon Walters takes an ABC3 host all over Australia to show off Indigenous culture and wildlife from top to bottom (Bushwacked).

If the Convergence Review recommendations are embraced by Government, over the next few years we will see the commercial broadcasters screening children’s content in blocks on their own digital channels.  The ACTF believes that content on multiple platforms and competition for the children’s audience between broadcasters is essential to improving the quality of offerings even further.

The Review is recommending expenditure obligations on content providers which would see new platforms screening Australian content and contributing to the cost of producing new Australian content.  But already, the digital platforms have joined with free to air and pay television broadcasters to describe the Convergence Review’s recommendations, aimed at ensuring the continuance of Australian content for Australian audiences, as “deeply flawed.”

As children are early adopters of new technology and the most important audience of all, there is clearly an important role for the ACTF to continue to play in ensuring that Australian children’s content is prevalent across multiple platforms into the future.