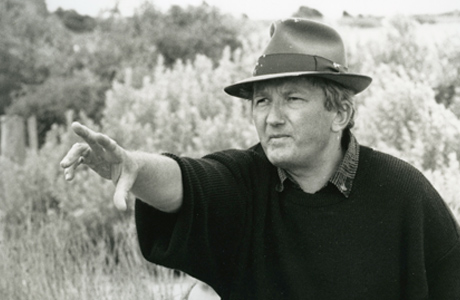 The life of filmmaker Esben Storm will be honoured at the Australian Directors Guild Awards with the announcement today of the Esben Storm Award for Best Direction in a Children’s Television (TV) Program.

The Award, proudly sponsored by the Australian Children’s Television Foundation (ACTF), will be presented for the first time at the ADG Awards on May 11 at the Maritime Museum in Sydney.  The Awards are being held as part of the special anniversary celebrations of the ADG’s 30th anniversary.

President of the Australian Directors Guild (ADG), Ray Argall, said:  “Esben Storm was one of Australia's leading directors and he brought his unique talents to the children's drama he created. So many much-loved memories have been forever forged into the minds of Australian children who grew up with the characters and stories he brought to life on screen as a director, writer and producer.

“Esben embodied the true spirit of the creative filmmaker - he was driven, passionate and stood up for what he believed. Not something easy to do in the filmmaking business. He was a founding member of the ADG/ASDA and, over the past 30 years, advocated the core values of the directors' guild. On set and during all phases of production Esben was loved by the crews and cast that worked with him, and he had a special rapport with the young performers he worked with in the children's television drama he excelled at.

“We are proud to honour his lifelong passion and commitment to creative story telling on screen and the craft of filmmaking with the naming of this award, the Esben Storm award for Best direction in a Children's Television (TV) Program.

Chief Executive of the ACTF Jenny Buckland said:  “The ACTF is proud to sponsor the Esben Storm Award for Best Direction in a Children’s Television (TV) Program at the ADG Awards.  Esben and Paul Jennings created Round the Twist, an iconic series that has brought laughter and enjoyment to millions of children around the world for more than 20 years.  Esben is connected with many ACTF productions – as a writer, script editor, actor, and most frequently, as a director.  He was one of a kind and, to those he worked with, he sparkled, entertained, provoked and challenged, always looking to push the boundaries.

“Children’s television drama in Australia is world class, and Esben’s contribution to the standards our industry has reached is immense.  In all the work he did with the ACTF he set the bar for children’s drama as high as it could go.  Recognising directors who continue to achieve the highest standards in children’s television is the perfect way for us to remember and honour Esben.”

Esben Storm passed away earlier this year after an illustrious career spanning 40 years.  He won several AFI awards, including Best Film for his very first feature, 27A, and multiple AWGIE Awards. Esben was also awarded a Centenary Medal by the Australian Government for his work in film and television.  His credits include In Search of Anna, The Other Facts of Life, The Big Wish and Deadly.

A statement from Esben’s family, Lisa Meagher, Buster Storm and Greta Storm, said: “As Esben’s family, we are so touched and proud that the ADG and ACTF have named this award after him.  Esben bought out the best in the people he worked with. His energy, imagination and enthusiasm were contagious. It is wonderful that he is honoured in this way."

The entry deadline for the 2012 ADG Awards has just been extended to March 5, 2012.  To be eligible for the Awards, all work must have screened publicly for the first time between July 1, 2010 and December 31, 2011, except for student films where the project needs only to have been completed within these dates.

Award applicants must be financial ADG members for the 2011 – 2012 year.  Membership details available at: www.adg.org.au.

To submit your entry and for further information to the ADG awards, go to: www.adg.org.au/awards.aspx

The rescheduling of the ADG Awards to May will enable them to coincide with the INPUT 2012 television conference, being held for the first time in Australia in its 25 year history.  Some 800 delegates, including 300 international guests, will attend INPUT 2012.

The ADG has partnered with INPUT in recent years through hosting a showcase of television programs featured in the international INPUT conference.