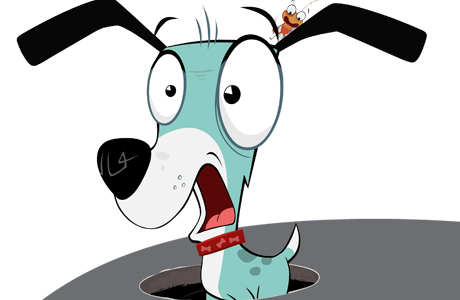 Flea-bitten!, a 52 x 12 minute series for 6 – 9 year olds produced in Melbourne by Gillian Carr of Moody Street Kids for the Nine Network, made its international debut at MIPTV in Cannes in April.

A pair of unlikely friends - a dog and a flea - escape the dog pound for hair-raising and hilarious adventures in the big city and beyond.

Flea-bitten! is cartoon comedy in the grand old tradition, with frantic chases, slapstick hilarity and the nuttiest cast of recurring guest characters ever assembled – colourful canines, feral felines and bizarre bugs that inhabit this animal-centric world. Each of the 26 TV half hour episodes is made up of two thematically linked but self-contained halves, so that Flea-bitten! can either be screened as TV half hour chunks or as 52 stand-alone 12 minuters.