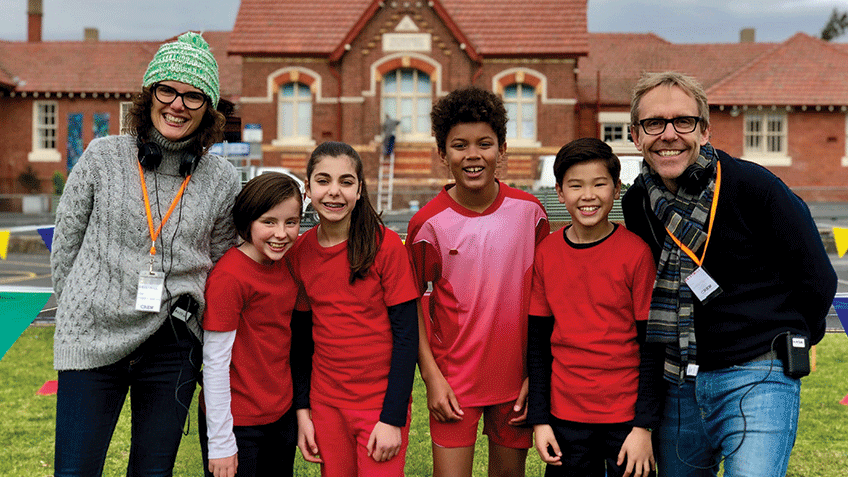 The InBESTigators are on the Case!

An exciting new series from Gristmill (the creators of Little Lunch), The InBESTigators has just commenced shooting in Melbourne.

The 40 x 15 minute comedy/mystery series from Robyn Butler and Wayne Hope will shoot in and around Melbourne from July until December, and is a co-commission between the ABC (Australia) and Netflix, with the series a 'Netflix Original' outside of Australia.

Eleven-year-olds Ezra, Maudie, Ava and Kyle are The InBESTigators; a friendly neighbourhood detective agency run by this mismatched group of primary school kids, who’ve taken over the granny flat in Ezra’s backyard. On call to solve any puzzle that crops up at school or in the neighbourhood – this team of savvy sleuths love nothing more than a mystery.

In every episode, there’s an intriguing case to crack, told by the kids in the same mockumentary style that worked so well in Little Lunch. While keeping audiences hooked through intrigue, comedy and action, The InBESTigators is packed full of heart as it explores themes of honesty, friendship and loyalty.

After the overwhelming success of Little Lunch, Gristmill producers Robyn Butler and Wayne Hope are excited to be back in the world of children’s comedy.

"We love kids, comedy and crime - the make-believe kind, obviously - and we are thrilled to be embarking on our new series, The InBESTigators, which combines all three." Robyn Butler – Producer/Creator.

Based on an original idea by Robyn Butler, this time around Butler and Hope established a writer’s room, working with a handful of emerging young comedy writers to plot and write all 40 episodes over the course of 2017, made possible by development funding from the ACTF and ABC.

With the scripts all written, all focus turned towards production. With Butler and Hope both directing on the series, the hunt was on to find the lead cast.  After 715 individual auditions for the four lead roles, talented newcomers Aston Droomer (Ezra), Anna Cooke (Maudie), Abby Bergman (Ava) and Jamil Smyth-Secka (Kyle) were chosen as The InBESTigators.

The series will utilise a large number of children in guest roles across the episodes as well. With each individual mystery taking place at school or in the neighbourhood, many of the other children who auditioned will also find themselves on the set of The InBESTigators in the coming months.

“The InBESTigators is going to be a fantastic series – we know from the success of Little Lunch that Wayne and Robyn’s comedy and take on an 11-year-old's world really work for this audience, and to have 40 episodes in this series is unique – it’s been a huge amount of work for Robyn and the script team, but each and every one of the episodes keeps you guessing, and smiling.  And the characters are just divine – we’ve fallen in love with them the same way we did with Rory, Debra-Jo, Atticus, Battie, Tamara and Melanie.”  - Bernadette O’Mahony, Executive Producer.

The InBESTigators will debut on ABC ME in Australia and Netflix in rest of world in 2019. The ACTF is distributing the series.