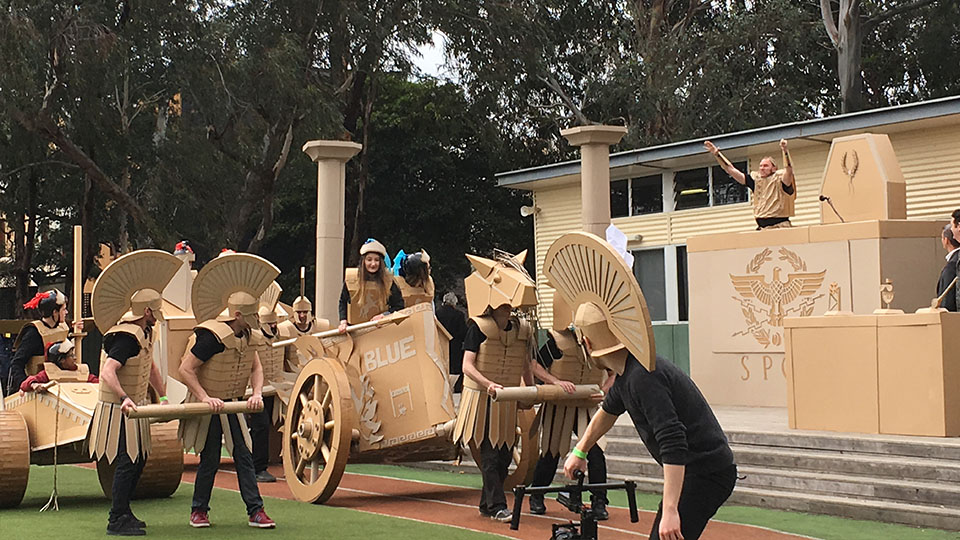 Princes Hill Primary school in Melbourne’s inner north was overrun by Romans on Wednesday afternoon as children, teachers and parents prepared themselves for a spectacular race.

BOXWARS (AKA The art of destruction) began in Melbourne in 2003 when a few people “looking for a laugh” (AKA The Boxwars Council) gathered to build battle armour with cardboard and then held events to destroy them. Destruction has never been so much fun. The phenomenon has spread around the world, capturing the imagination of artists and engineers of all ages. Huge audiences gather to watch the spectacular live “mock” battles at art and music festivals, and also to take part in the construction workshops. Now, 13 years on from inception, Boxwars is looking to invade our TV screens. 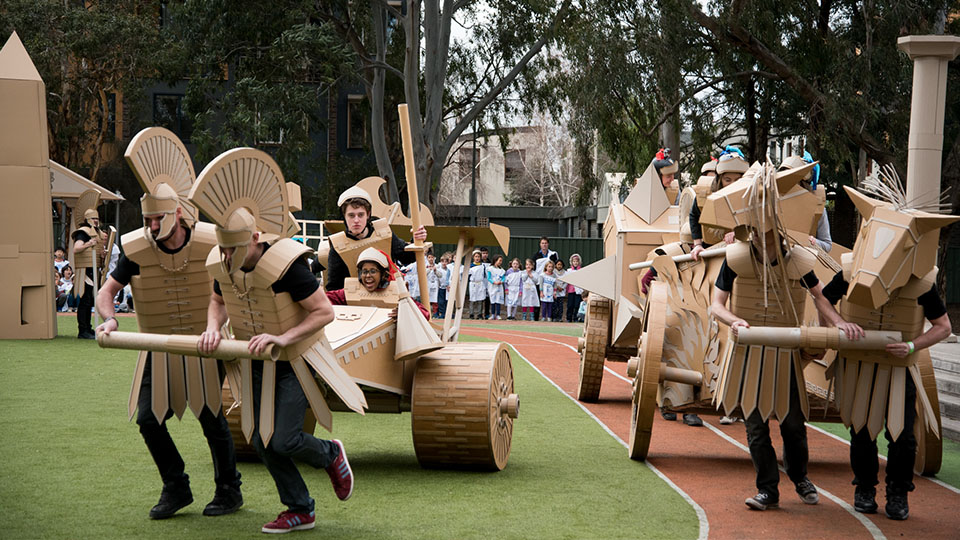 With development assistance provided by the ACTF, Executive Producer Bruce Kane is developing Boxwars into a fantastic TV series for children (and grown-ups who’d like to be children again.) Teams of children star in the half hour format in which they must tackle construction challenges under time constraints using a restricted supply of cardboard. Once built, their masterpieces must be tested to see whether or not they can work like their real life equivalent. 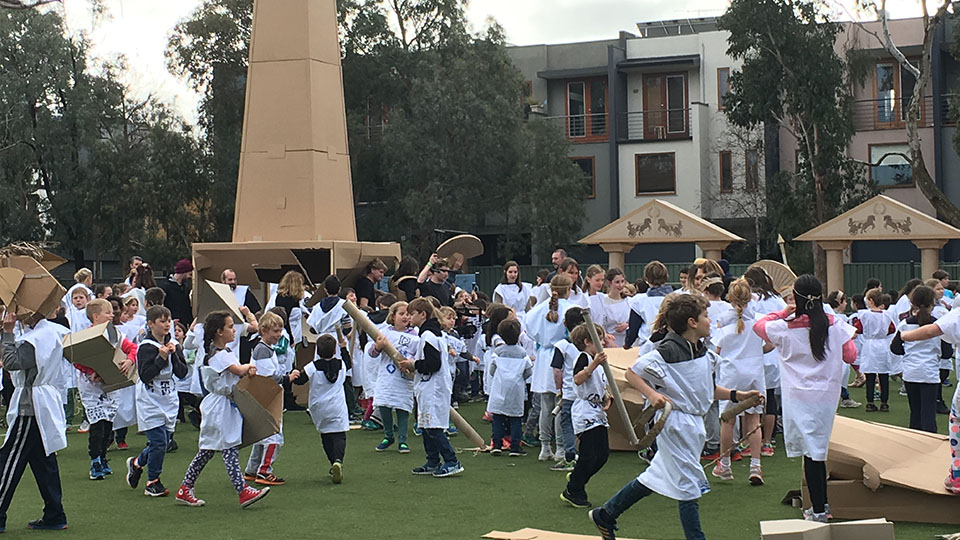 The pilot episode, filmed in part on Wednesday afternoon and directed by Nick Campbell, challenges teams to build a Roman chariot with the capacity to race three laps around a track – and one ‘stunt lap'. Chariots were judged in three categories; engineering strength, visual artistry and sheer comedic value. These vehicles were incredible. It was hard to believe they were built by teenagers, and harder still to believe that each one could carry two passengers and be hauled around the racetrack at lightning speed by Roman Guards, fully clad in cardboard armour. Meanwhile, Emperor Caesar sat high on his cardboard throne. (The grand columns beside him were toppled by the odd gust of wind but they were pretty cool too.)

With their colosseum in place the Boxwars team took a brief moment to admire their work. Producer Judy Whittle was thrilled and perhaps surprised at “what a little money from the ACTF can do". 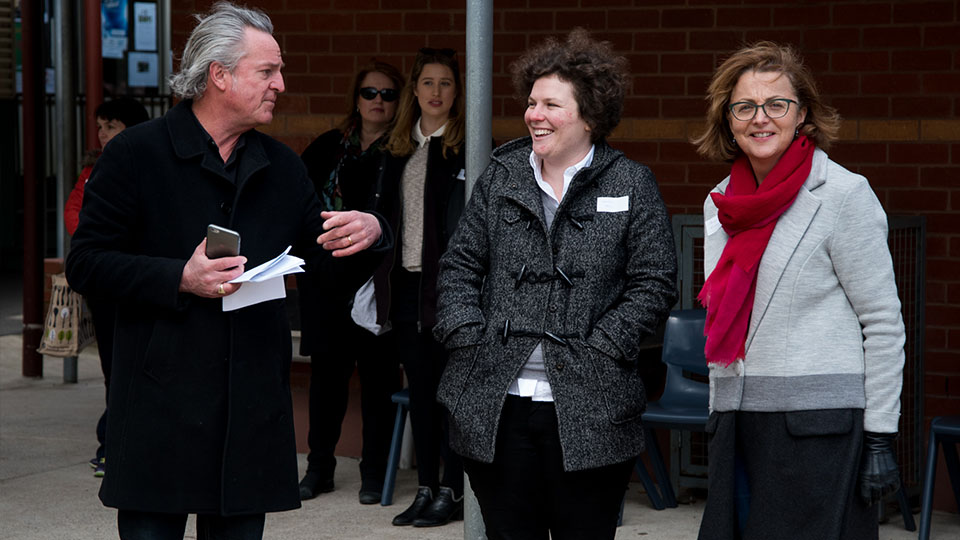 Of course no chariot race would be complete without a crowd of riled up Romans, who were played this time by the students of Princes Hill Primary, looking the part in their self-decorated costumes. This audience relished every second of cardboard chaos. From the first lap their fascination was palpable and their joy was insatiable. Again, Judy Whittle was blown away by the enthusiasm of the children, feeling “They’ll remember this day of school for the rest of their lives.” They particularly enjoyed the deconstruction; when the race was over children swarmed the ruins to claim any piece of armour or Roman architecture they could. All surviving props will be revived in an upcoming school theatre piece set in ancient Rome.

There’s no doubt that Boxwars has all the makings of a terrific series that children all over the world will love; 300 young Romans proved that on Wednesday. But beyond the live-event element of the series lies the fantastic educational potential. Just like beloved series such as Art Attack and Mythbusters, Boxwars engages children in creative and engineering challenges that simultaneously entertain and educate.

With a wonderful pilot episode behind them, the team on this Bruce Kane Production is preparing to pitch Boxwars the TV series to local and international broadcasters and hopes to have a series on air next year. 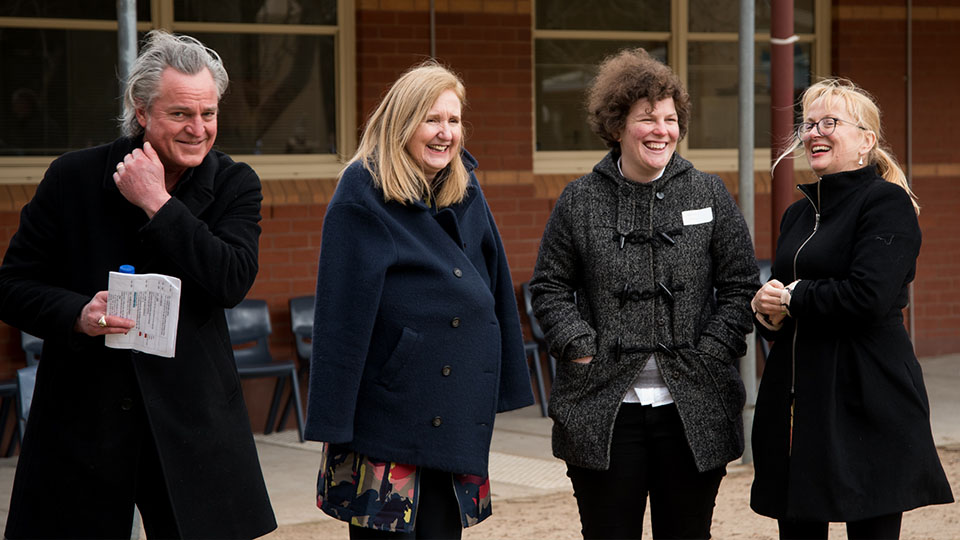