You're Skitting Me is an Australian sketch comedy show for kids, starring all new Australian talent and featuring a random mix of characters, parodies and animations.

The sketches are an edgy mix of zombies, cavemen, scary Girl Guides, parodies of Twilight and talent shows as well as some offbeat animations that will delight kids and parents alike. Made for ABC3 by Jigsaw Entertainment, the show stars an ensemble cast of six teenagers, five of which are new to television audiences.

You’re Skitting Me is aimed at children aged 10 to 15 years, but its contagious humour will be sure to provide a laugh for everyone else too!

Episode 1 follows what happens when twilight comes to Australia and features our very own Australia's Next Big Talent Competition. We meet Uncle Vijay, who commentates on the latest television shows, and takes a look at cavemen times to see what new and amazing ideas are being invented. Jacob the child superstar tries to make a comeback and two BFF's go through good and bad times in their friendship. Jollimont High Witness News take a look at children in detention. Superhero Vomit Boy takes on his latest adventure while Larry and Chuck, talking tomatoes and niggling flatmates, argue over the small things in life.

Episode 2 introduces Mario and his faithful assistant Luigi into a world outside their computer game; 2 scary girl guides try to earn their"Being Helpful" badges; the first installment of "Viking High" where young Vikings are being trained to join normal society; and Voldemort tries to win a board game. Jollimont High Witness News follow the case of the missing pencil case, while resident safety girl Maive Blairs lays out the OH&amp;amp;S rules. Rex the Dinosaur takes on his bullies in a running race and two mates get stuck at home with NO internet. Arhhh!

This episode continues the arguments of Mario and Luigi as they get their hands dirty, we drop in on the bickering judges of Australian's Next Big Talent; we see Kronk the Caveman explain maths to his clan and Voldemort tries to buy a new car. Vomit Boy saces the world from more danger. We meet new characters, Bear Cub, as he treads the perils of the wild and an accident prone Helmet Boy.

This episode sees Mario and Luigi contemplate going back to their old gaming career; Uncle Vijay reviews Glee; Bella tries to get through to Edward in the latest Twilight Oz Style; the cavemen look at the wheel and the news team break the latest scandal. We meet the Zombie Kids who try to 'live' in the real world, and the laughing clowns, Andrew and Roger. We also thrust onto the world the greatest craze since planking, Puddlejumping.

The Scary Girl Guides help a frail old man across the road, even though he doesn't want it. At Viking High it's time for the all important sex-ed class; Tony the Happy Emo starts a ukulele band. Rex the dinosaur finally gets a job, but eats his co-workers. The cast are put through a rigorous spelling bee, and the new fad, Puddlejumping, continues its march to world domination.

This week, we meet Tatiana the sailor girl is attempting to become the youngest person to sail around the world it's a pity she has never been on a boat before. Krunk the Caveman invents social networking; the Hipsters have a new way to attack conformity; and a new character, Art, tries to launch a showbiz career. We also meet the Internet-Speak Girl, who can only talk as though she is online #getit? The cast produces a very moving community appeal to save the Zombies, and we meet Inappropriate Joe, who always manages to say exactly the wrong thing at exactly the wrong time.

A new breakfast cereal has been launched, packed with energy, so you can Puddlejump with the best of them. Tatiana, the Sailor Girl restarts her trip; we learn the secret of the bogan vampire from Twilight Oz Style; Bear Cub teaches us how to survive while on Work Experience; and Uncle Vijay reviews 'Farmer Wants a Wife. The Internet-speak girl gets a part-time job, and the OH&amp;S Prefect tells us what to do during a Fire Drill.

This episode, a date ends in horror, Molly and Cosmo decide to do their class presentations as interpretive dance; some pre-performance gas lets one contestant through to the next round of Australia's Brand New Talent; there's an upset in the Sleeping World Cup and we meet a very computer savvy homeless man. A diamond heist is interrupted over an argument about racism, and a science student opts to dissect a charming prince instead of having her phone taken off her by her parents.

The cast reveal they are being split apart by Hayden's insistence on eating dim sims on set. The Yay Team defeat office culture; Tatiana is bored at sea; a self-help group for sports jackets gets a new member; OH&amp;S prefect falls over, a lot; and one of the laughing clowns joins a social networking site; and a contestant of Australia's Brand New Talent rides two unicycles at the same time, well almost.

Krunk, the innovative caveman, invents fire; while the OHS prefect is attacked by a tiger. Uncle Vijay reviews Dr Who; while Bear Cub hardly survives his parents party. Molly comes up with a catchy tine to promote world peace while the Yay team take on the supermarket. Vomit Boy saves a busload of kids about to be hit by a train, and Inappropriate Joe insults everyone he talks to. It's a pot pourri of bizarreness, as always, on You're Skitting Me

Ever wondered what happens when shoe salespeople go back to see if they have your show size? All is revealed on YSM. The Scary Girl Guides start a guaranteed money spinner, which is almost legal; Art has another crack at superstardom; Australia's youngest billionaire is revealed to be a fake; Tatiana gets caught in a storm and is sure she is going to drown; the tomatoes fight over Aussie Rules and Inappropriate Joe gets asked out.

It's a jam-packed episode, with Krunk the Caveman inventing paper, Tatiana is running out of food and considering catching a whale, and bogan Bella comes to the realisation she and Edward will never be together. In an investigative report Jollimont High Witness News proves that there is no point to school. We get an insight to a Kids Call Center, which has been created to save adults from appearing too stupid. Some of our Viking Students look for career counselling and Rex the Dinosaur finally gets a girlfriend, and then eats her.

Last episode of the series, and Inappropriate Joe is the most inappropriate you can be on TV. We discover what kids lurk at the back of the classroom; why it's good to eat spiders; and introduce the latest in phone technology (the Tin Phone v.6). The Yay Team kick up a storm, Tatiana's boat is overrun by pirates and Vomit Boy saves the endangered river dolphins. 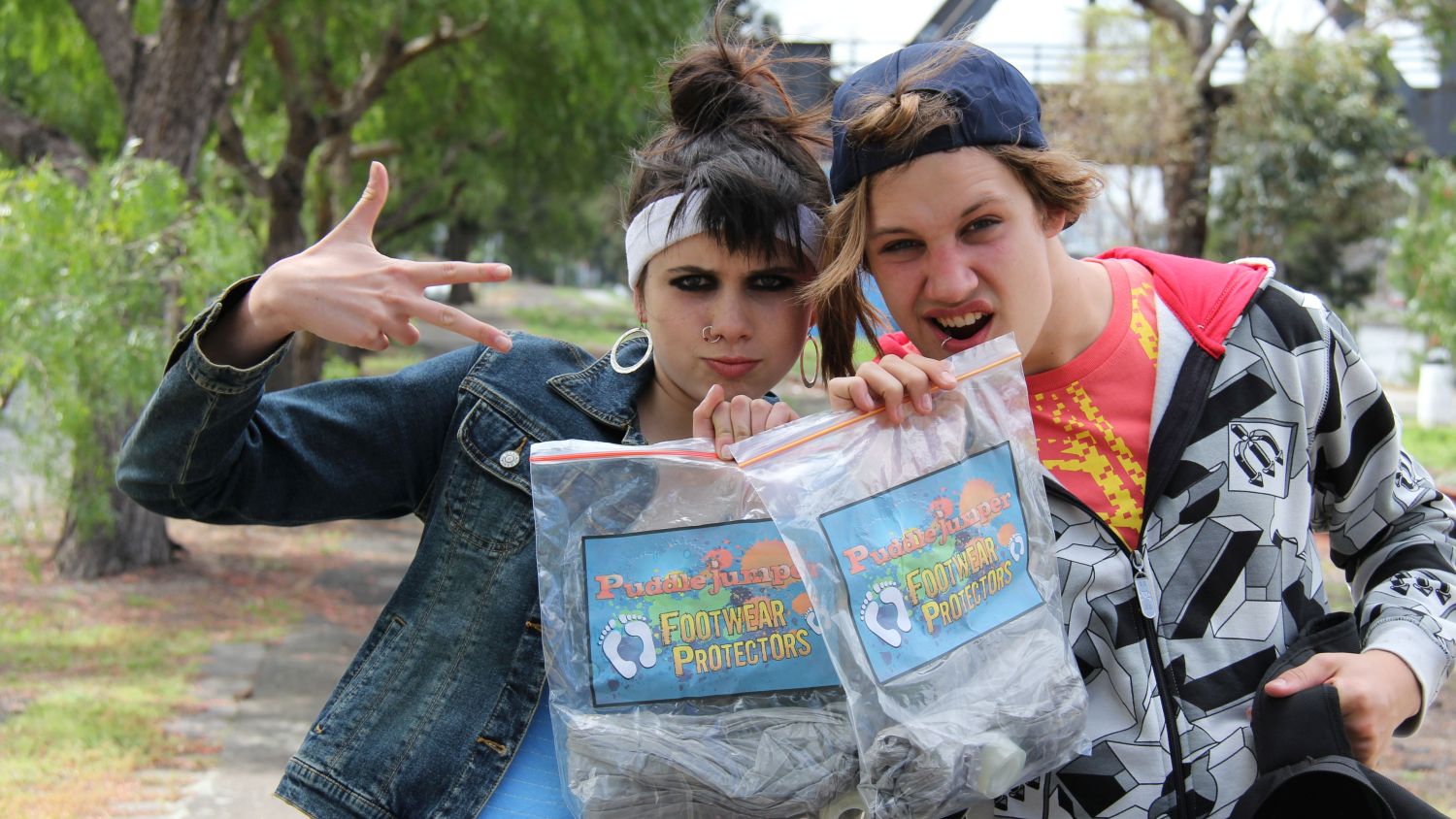 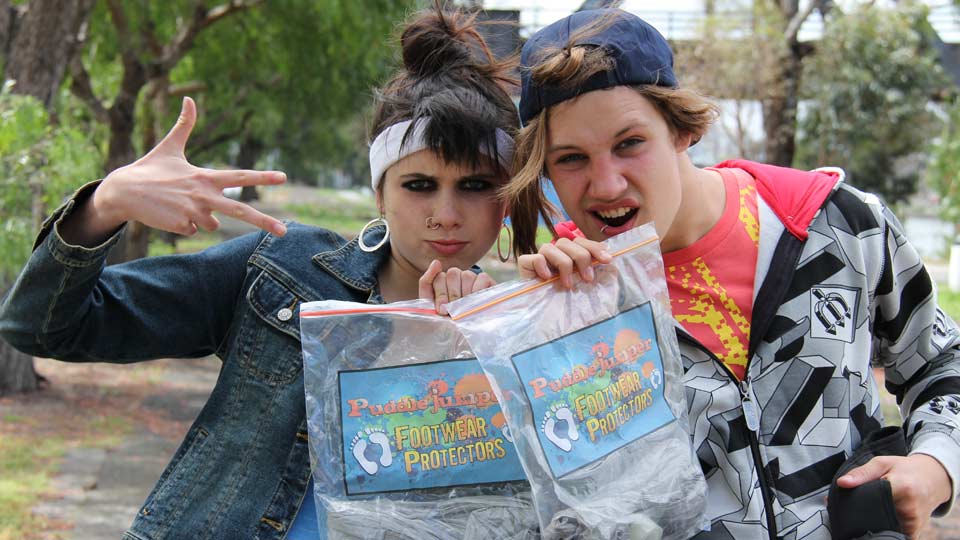 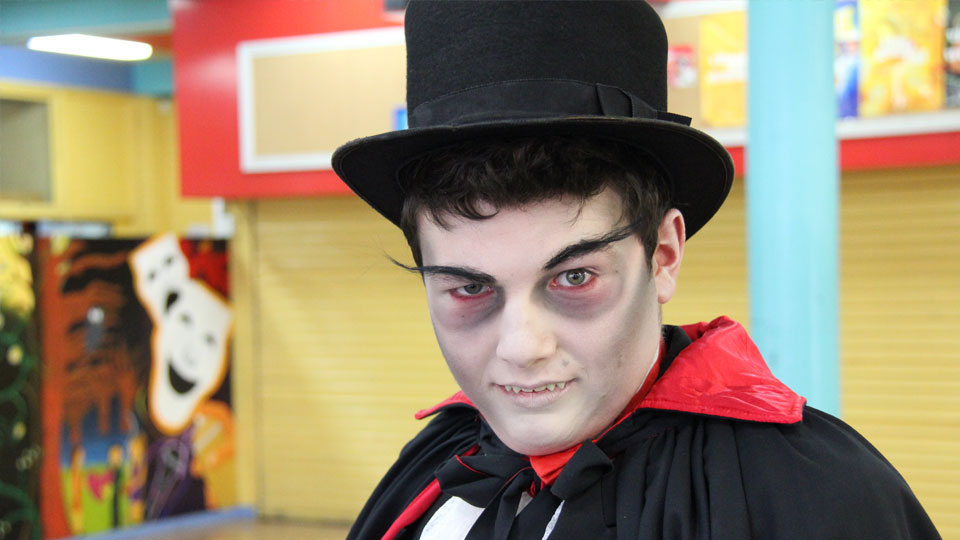 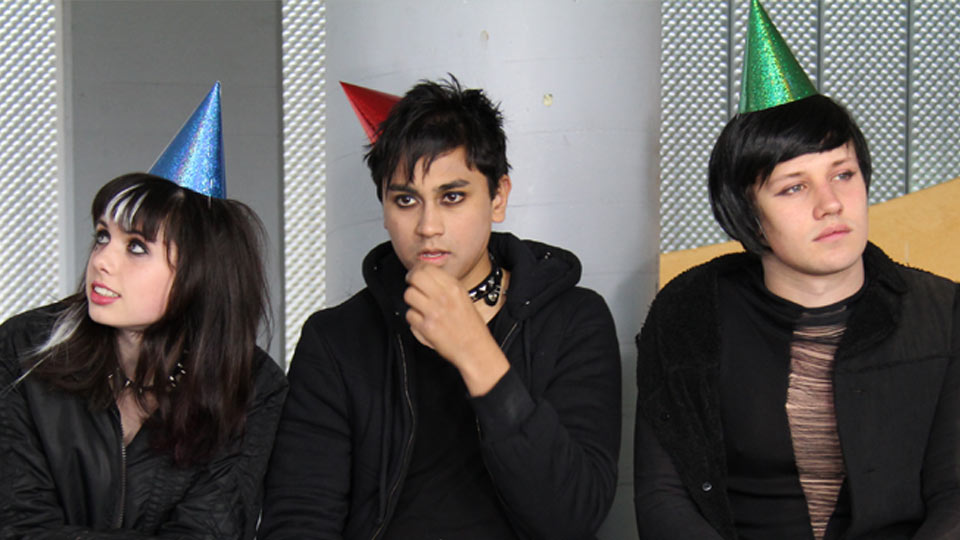 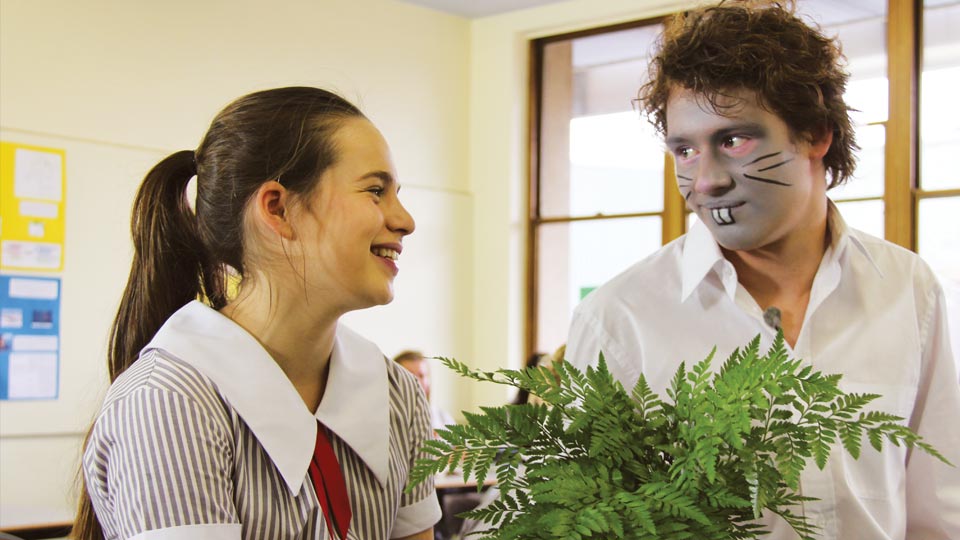 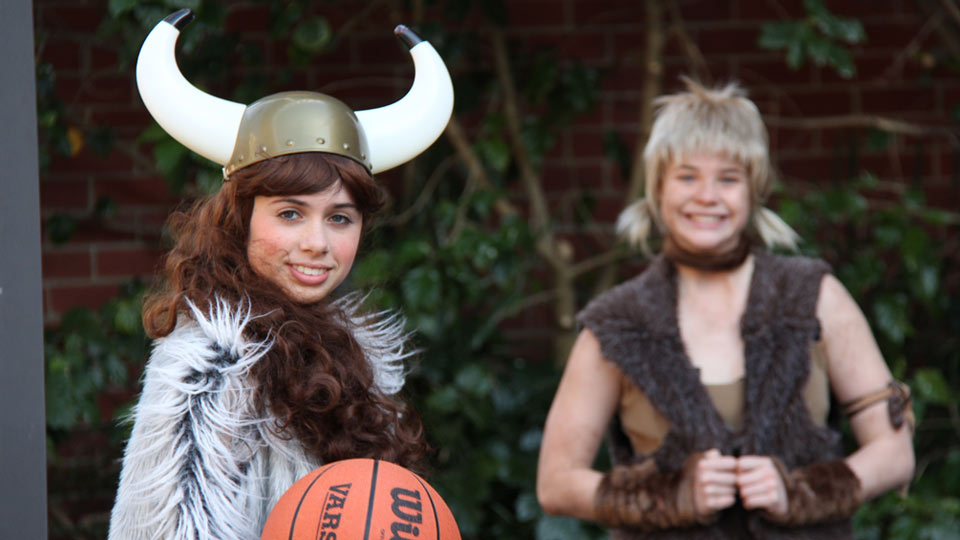 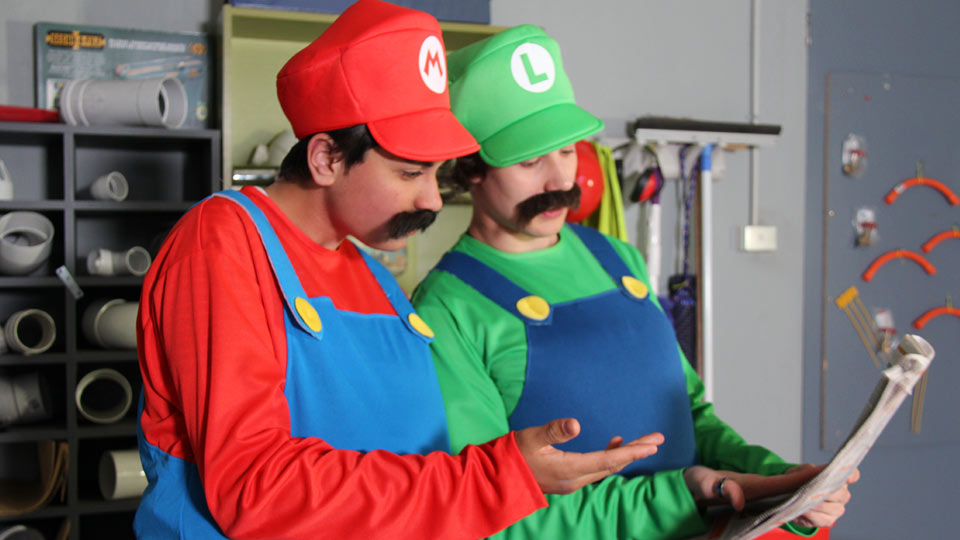 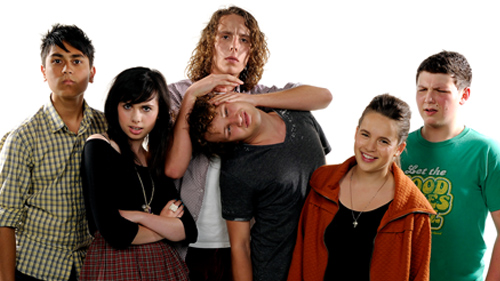 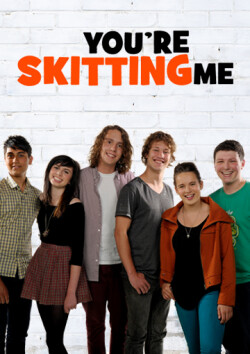