The Valley Between (a.k.a Sun On The Stubble)

Bruno Gunther is a 14-year-old boy from a German immigrant family, growing up in a small Australian farming town in the 1930s.

While his father preaches the virtues of hard work on the farm, Bruno finds all sorts of opportunities for mischief and adventure, as he explores the world around him. Through his adventures, Bruno comes to appreciate and understand more about himself and his community.

A gentle family drama series based on the beloved children’s books of award-winning novelist, Colin Thiele.

Bruno and his best friend Benny are stuck up a tree after being chased by Mr. Mibus' bull. As it snorts and paws the ground underneath the tree, Bruno takes off his shorts and throws them onto the bull's horns. Then, both boys make a run for it. Benny gets away, but the only escape for Bruno is over the town fence. Running in his underpants through the town, Bruno startles Miss Knightley, the new schoolteacher. At school the next day, Bruno is worried that she recognised him. And after a school prank goes disastrously wrong, his reputation lies in tatters!

Despite Bruno's father being unhappy about his practical joke, he allows Bruno to go to the Gonunda Town Dance. That night, Bruno becomes involved in a desperate mission to rescue his eldest sister, Lottie, and her boyfriend, Eddie, who have snuck off into a wheat train that suddenly steams off into the night. Bruno must get his sister and Eddie back to the dance, before their dad notices they are missing.

Inspired by Bruno, Jack Ryan challenges old Hermann Heinz to a 'best-of-three' race, up the steepest road in the district, between his Model T Ford and Hermann's trusty horse and sulky. The bets have been placed and the race is on. News spreads quickly, and soon the whole town is buzzing with excitement. While Bruno sides with Jack's flashy car, his dad backs the horse. Bruno is worried when Jack, who is famous for running late, seems set to agree to Hermann's tricky race rules.

The day of the big race dawns. The whole town is divided between horse and car, and even Bruno's mum decides she wants to see who wins. Jack manages to arrive in the nick of time. Bruno's dad cheers loudly for Hermann, but Bruno and his sisters are shouting for Jack. Jack is winning until he reaches the steepest part of the road and his car mysteriously stops. Bruno has a brilliant idea and when Jack puts his car into reverse, he charges up the hill, wins the race, flies over the top and down the other side - straight into a pond.

The annual beach picnic is approaching and Mum is knitting new bathing costumes for all the children. Bruno complains that he can't possibly wear his because everyone will laugh at him. His father hears his complaints and becomes angry. He tells Bruno that he must stay at home and do the chores instead of going to the picnic.

While Jack Ryan's brand new wheat harvester stands proudly on a flat-topped railway truck, the Gunthers and the rest of the town prepare to catch the train, leaving Bruno behind. However, when Bruno returns early to meet the train, he sees that the harvester has disappeared. Discovering it further down the track in the path of the train, Bruno finds himself at the centre of a perilous drama. He must stop the train to save his family and friends.

To everyone's great surprise, Dad has bought a car. Bruno and his sisters are ecstatic. The family's first outing is a tin-kettling party for a local couple who are to be married. The incredible noise made by the orchestra of improvised instruments is meant to frighten away evil spirits. But when Benny's Uncle Gus is returning from the celebration, his horse stops for no reason, apparently terrified by a ghost coming towards it. The horse bolts, throwing Uncle Gus into a ditch. Rumours of ghosts and ghoulies surface again in the town, and when Bruno and Benny go pigeon hunting, they think they see the terrifying shape of a ghost in an abandoned horse stable.

Bruno finally solves the riddle of the ghost in the stables. Meanwhile, Dad is having trouble working out his superstitions regarding the new-fangled technology of his Model T Ford. Told to empty the oil sump at 500 kilometres, and despite being in the middle of a dusty track, he stops and empties the hot oil all over himself and the road. As he drives home, the engine seizes up completely, leaving an embarrassed Bruno to reach an understanding with his father.

When Bruno goes on his rabbit trapping rounds, he meets up with a wild looking hermit, Ebenezer Blitz, and his wolf-like dog. But for the moment he forgets the encounter, as his family runs into a series of trouble. When a bull being prepared for slaughter breaks loose, Bruno hits the wrong lever and Dad breaks his leg. Suddenly, Bruno finds himself as the man of the family with all the responsibilities of running the farm. One morning, Bruno and his mum discover that all their turkeys have been killed. Suspecting a fox, Bruno and his friends go hunting, and again Bruno encounters the mysterious, aloof Ebenezer and his threatening dog.

Dad returns home on crutches and tensions in the Gunther household begin to simmer. When Dad finds out that Eddie Kock has been helping out around the farm, he is furious. While Bruno begins preparing for his role in the school play, Lottie is at her wits' end. Deciding to get away from her father's stubborn refusal to accept Eddie, she leaves for the Barossa Valley. As Bruno returns to the hills with some Harvest Day presents for the lonely Ebenezer, he makes a disturbing discovery.

Keeping to himself his fear that Ebenezer's dog might be the killer, Bruno joins in the community hunt to find the suspected fox, which has savaged one of Mr. Mibus' prize rams. Bruno hears that Mr. Mibus has shot Elijah, and when he rushes up on the old hermit, he discovers the strange, shaggy figure in a sick and demented mood, promising to bring Mr. Mibus' world down in a blaze of fire.

Worried that Ebenezer will carry out his threat, Bruno and Benny keep watch on Mr. Mibus's store. As Bruno peers inside, he sees a shadowy figure spreading petrol. Windows are smashed and suddenly the store is ablaze. It swiftly burns to the ground. Mr. Mibus blames Ebenezer for the tragedy, and prepares to claim the insurance money, but Bruno knows more than he's prepared to admit. When Ebenezer is brought before The Magistrate, Bruno must decide whether he will tell the truth, or stay quiet and protect his family and the townsfolk, who are all relying on money from Mibus. Bruno is caught between his loyalty to the townsfolk, and his affection for the old man. He makes his decision and earns the respect of his father, before leaving for Adelaide and a secondary school education. 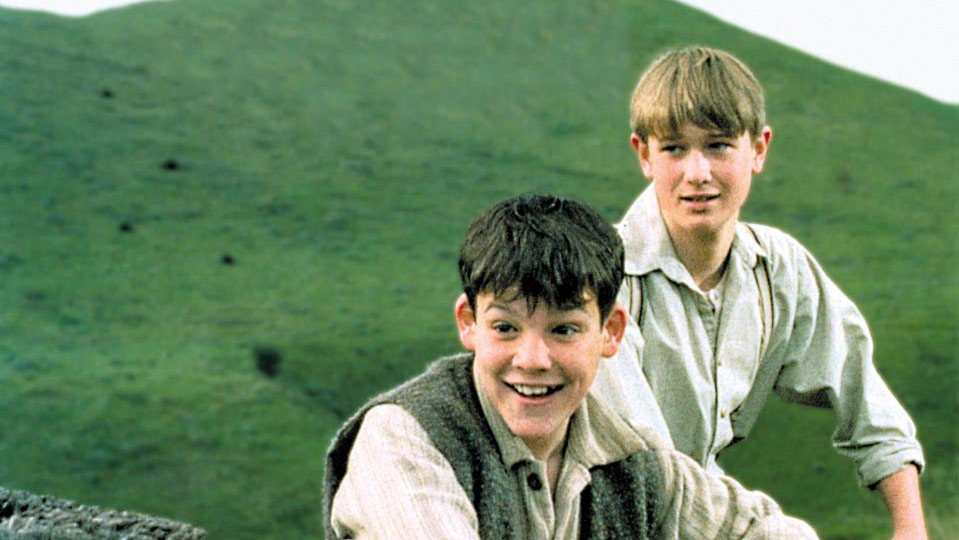