In the year 2347, on a voyage from Old Earth to New Earth, a freak accident causes the Dogstar; a giant space ark containing all of the world’s dogs, to become lost to mankind.

This fascinating scenario sets the scene for the heroes of the story, the Clark kids, to find the Dogstar and return the dogs of Earth to their owners. Throughout this journey, they meet strange alien races, unusual phenomena, puzzling conundrums, perplexing paradoxes and startling challenges. And that’s before they even go outside. They have a personal responsibility to locate Hobart, their adorable pet, but in a broader sense they are saving the Earth from the evil genius, Bob Santino and his army of Robogs.

As the story unfolds, the Clark kids are confronted with many problems concerning Earth’s environment, sustainability, toxic contamination and the darker side of technology. They meet people who are attempting to clean up the world and save the planet but who are hampered by the enormity of the problem resulting from centuries of pollution and mismanagement. The series is humorous, engaging and positively brilliant in its use of Flash to achieve rich and intense animation.

A Dog's Tale
During the move from Old Earth to New Earth all of the world’s dogs go missing. In the year 2347, when Old Earth is pronounced un­inhabitable, the Clarks load their family dog Hobart onto an intergalactic ark called the Dogstar to be transported to New Earth. Unfortunately, the Dogstar never arrives. All the dogs from old Earth – and two confused robot pilots, Zeke and Alice – are lost. But the Clark kids (and Gran) are determined to find the Dogstar and bring those dogs home. Robotics entrepreneur Bob Santino is just as determined to stop them.

Obedience School
Lincoln escapes from the evil Bob Santino and joins the crew of the Valiant. Out in space, Glenn, Simone and Gran discover it’s not easy finding a lost Dogstar in the battered old Valiant. Back on New Earth, at Bob Santino’s heavily guarded School for the Gifted, Lincoln manages to breed a cat called Boombah that can sniff dogs across galaxies. Lincoln and Boombah are exactly what the Valiant crew need. But can they grab them right from under Bob’s nose?

Fetch
The Clark kids are trapped by Gemma, a rock-throwing alien. Pursued by Bob Santino, the Clark kids crash land the Valiant on an asteroid called Gavin where they meet Gemma – an alien. She imprisons them, throws rocks at them and tries to eat Boombah. Eventually, they form a friendship and she joins the crew on their quest. Friendship is like that. You have to take the rough with the smooth.

Pedigree
Lincoln enables Boombah the cat to speak. Visiting New Earth, the Valiant crew meets Ramon Ridley, the original inventor of the Robog. They help him back to New Earth to confront Bob Santino, the man who ripped him off! Lincoln creates a voice-box for Boombah so they can understand what he’s saying. This proves to be an annoying mistake. Not surprisingly, the Dogstar remains lost.

Dogfight
The Valiant lands on a planet where aliens are constantly at war. The crew of the Valiant become embroiled in a war between two alien races; the Glurgs and the Radnoks. Gran tries to unite the warring factions by introducing them to the joys of competitive sport. It works. Trouble is, it turns out to be more dangerous than war – and the Valiant crew members are right in the middle of it. On board the Dogstar, Zeke and Alice almost fly into an orange sun but are saved when Hobart unknowingly helps the robots fix the navigation system.

Underdogs
The Valiant crew is captured by robots. The Valiant is captured by the robot inhabitants of Ruca, a race that has done away with humans. Ruca now has a king and queen robot and slave robots called drones. The robots recognise Gran, with her robotic leg, as being almost like them. They confide in Gran and with her inside knowledge, she is able to save the kids from being exterminated. Meanwhile, Zeke decides to see what life is really like as a dog, and joins Hobart in his kennel. He discovers he actually prefers it to working with Alice.

Sick as a Dog
The Dogstar arrives back on Old Earth. The Clark kids meet Ramon Ridley again. He says he knows where the Dogstar is – and directs them to Old Earth! Indeed, the Dogstar has returned to Old Earth. Zeke and Alice make the unwise decision to let the dogs out for a walk. Old Earth remains polluted and the toxic fumes practically destroy Zeke and Alice. But Hobart manages to save them, and they immediately leave. Moments later, the Valiant arrives. Once again, so near and yet so far. Ramon chooses to stay on Old Earth and begins cleaning up the planet with a broom.

Man Bites Dog
The Dogstar reaches New Earth but the space ark is no longer its normal size. The Dogstar goes through a microwave radiation anomaly and ends up the size of a tennis ball. It arrives at New Earth where, by a stunning coincidence, it ends up inside the very Robog that belongs to Mark and Greta Clark. As Zeke says, ‘Stranger things have happened,’ though he can’t think what. Meanwhile, a damaged Valiant crash-lands on Old Earth and the kids meet up with Ramon Ridley who is still trying to clean up the planet. This is difficult because Bob Santino has been dumping all his toxic waste on Old Earth.

Tail's End
Everyone and everything moves back to Old Earth. Ramon Ridley finishes rejuvenating Old Earth and swears the Valiant crew to secrecy. He gives them a homing device that will attract the Dogstar and to everyone’s surprise, it works! The crew return to New Earth with the Dogstar but are greeted by mass panic. Bob Santino has accidentally sent Robogs digging to the core of New Earth where they have triggered earthquakes. New Earth is about to implode. It’s time to leave. But where to? The kids have to break their promise to Ramon but in return extract a promise from everyone to look after their old planet. Everyone is reunited with their pet dogs on Old Earth. But will history repeat itself? Probably, if human nature is anything to go by. 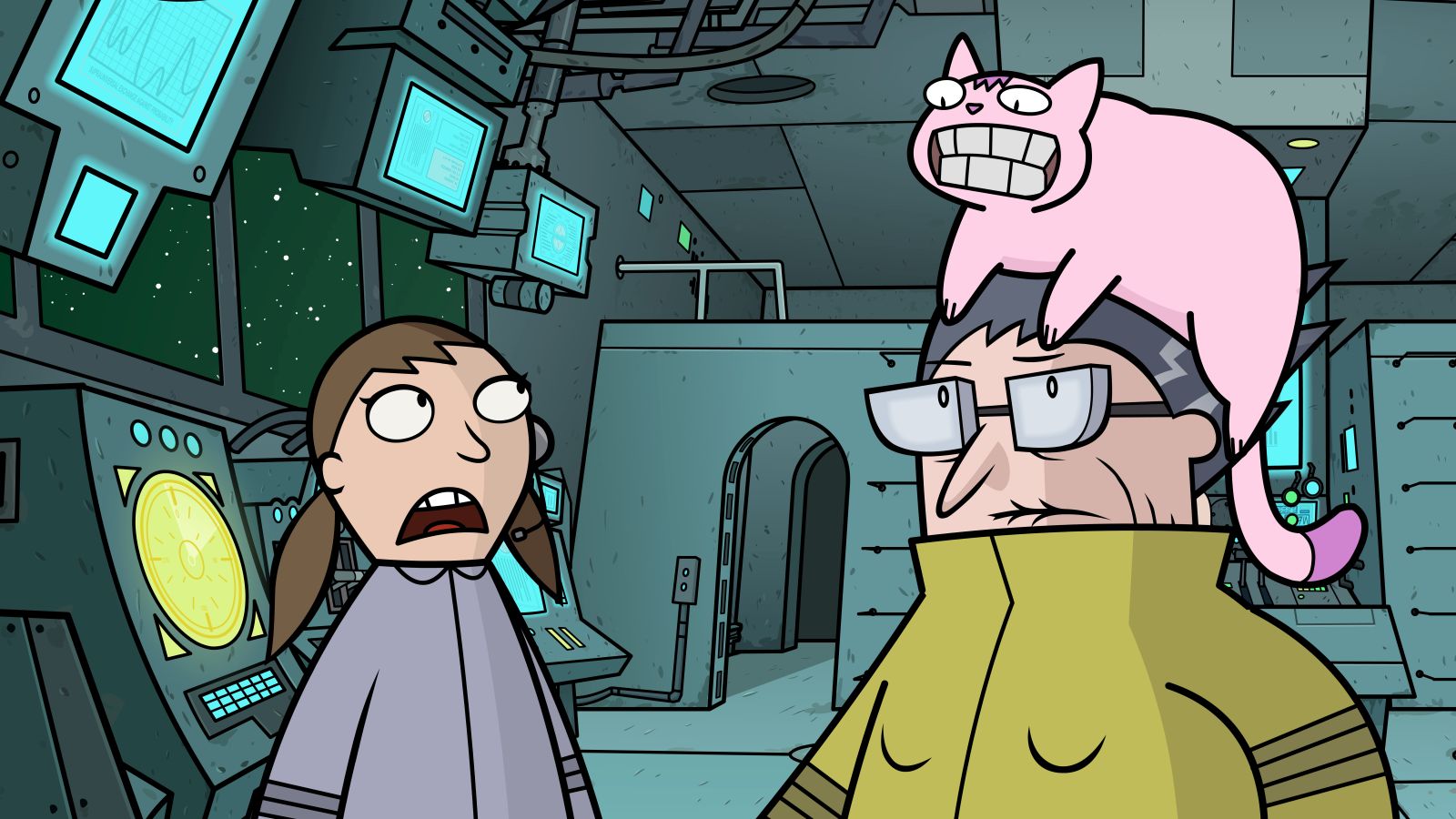 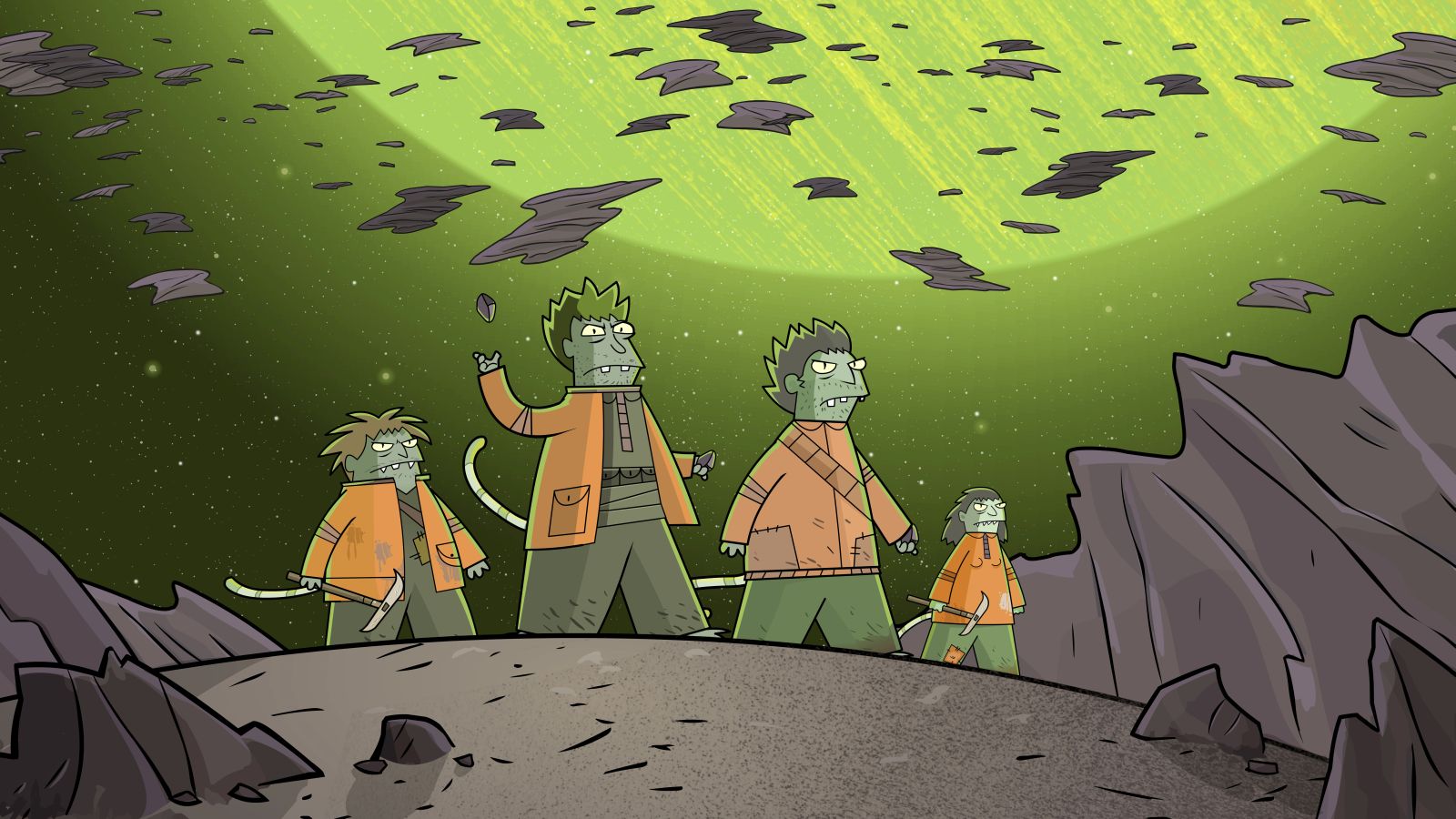 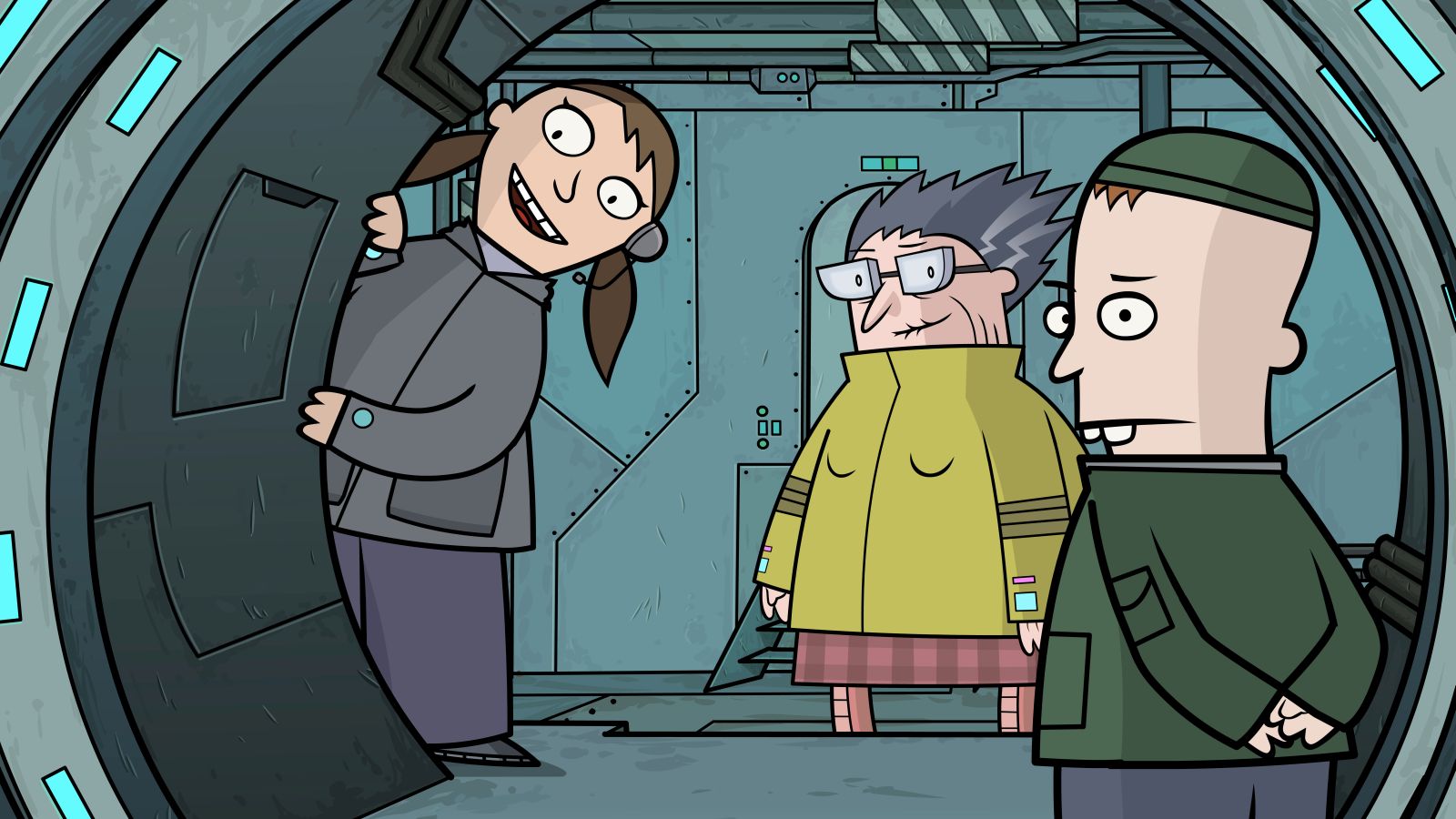 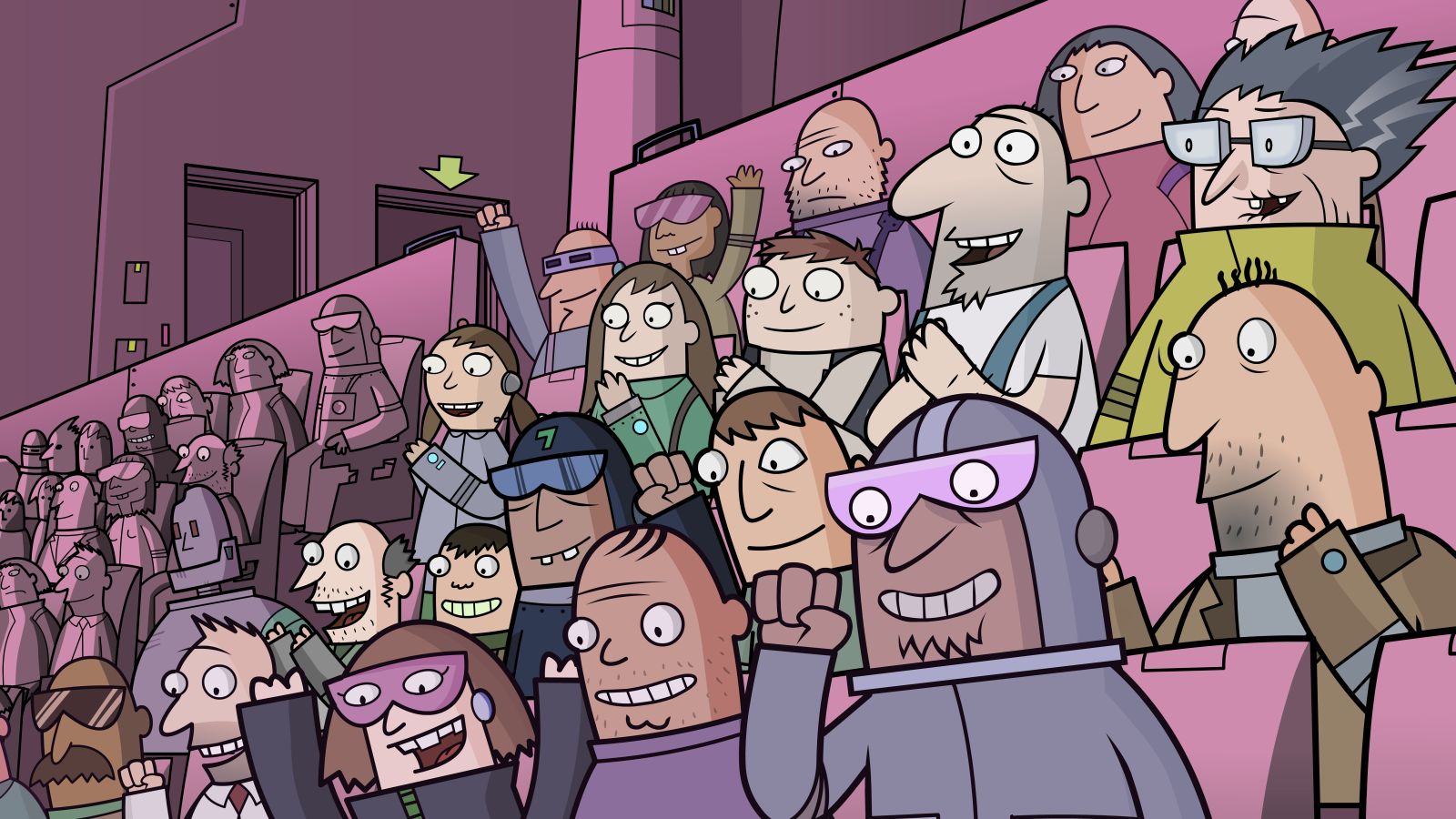 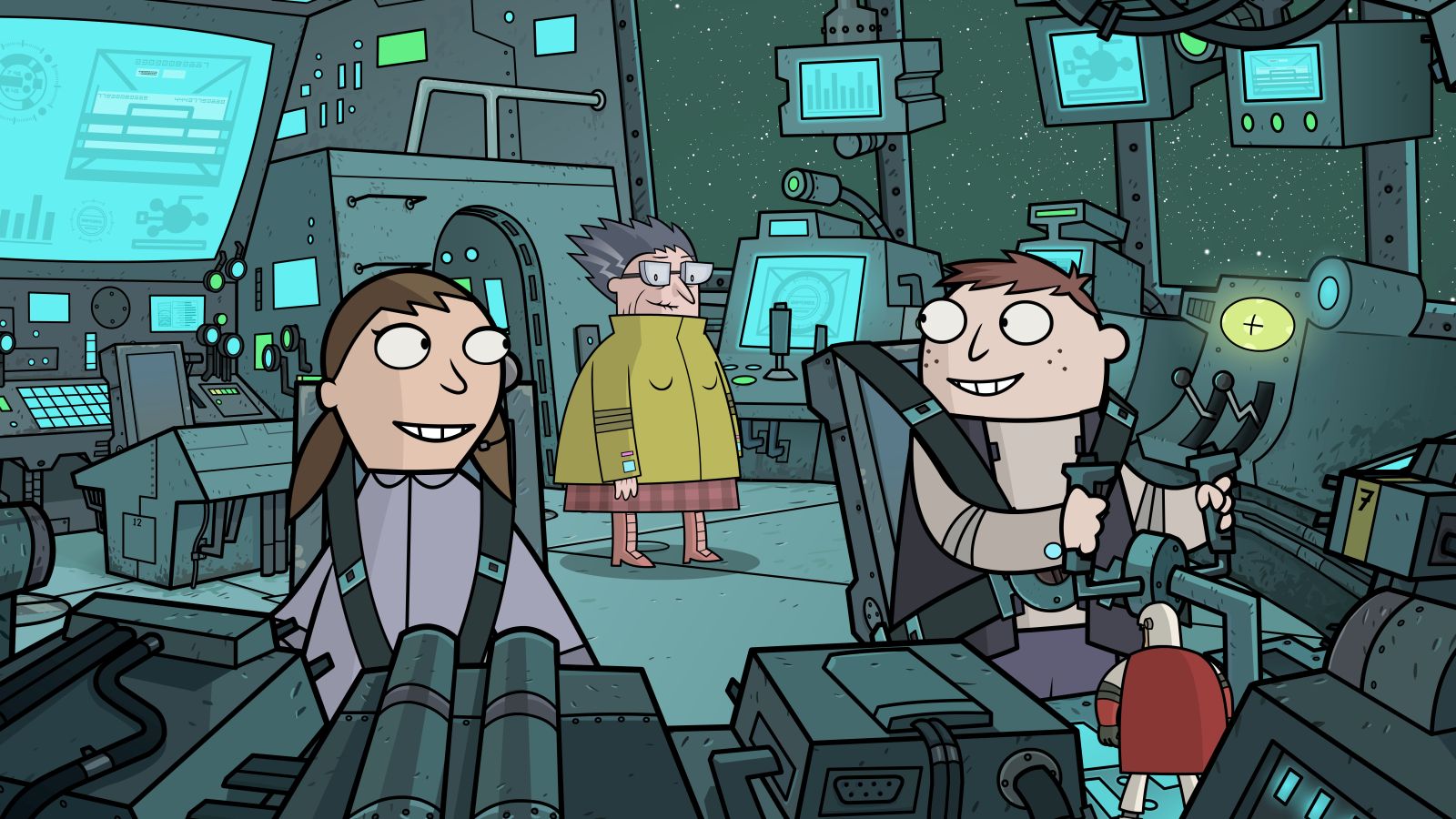 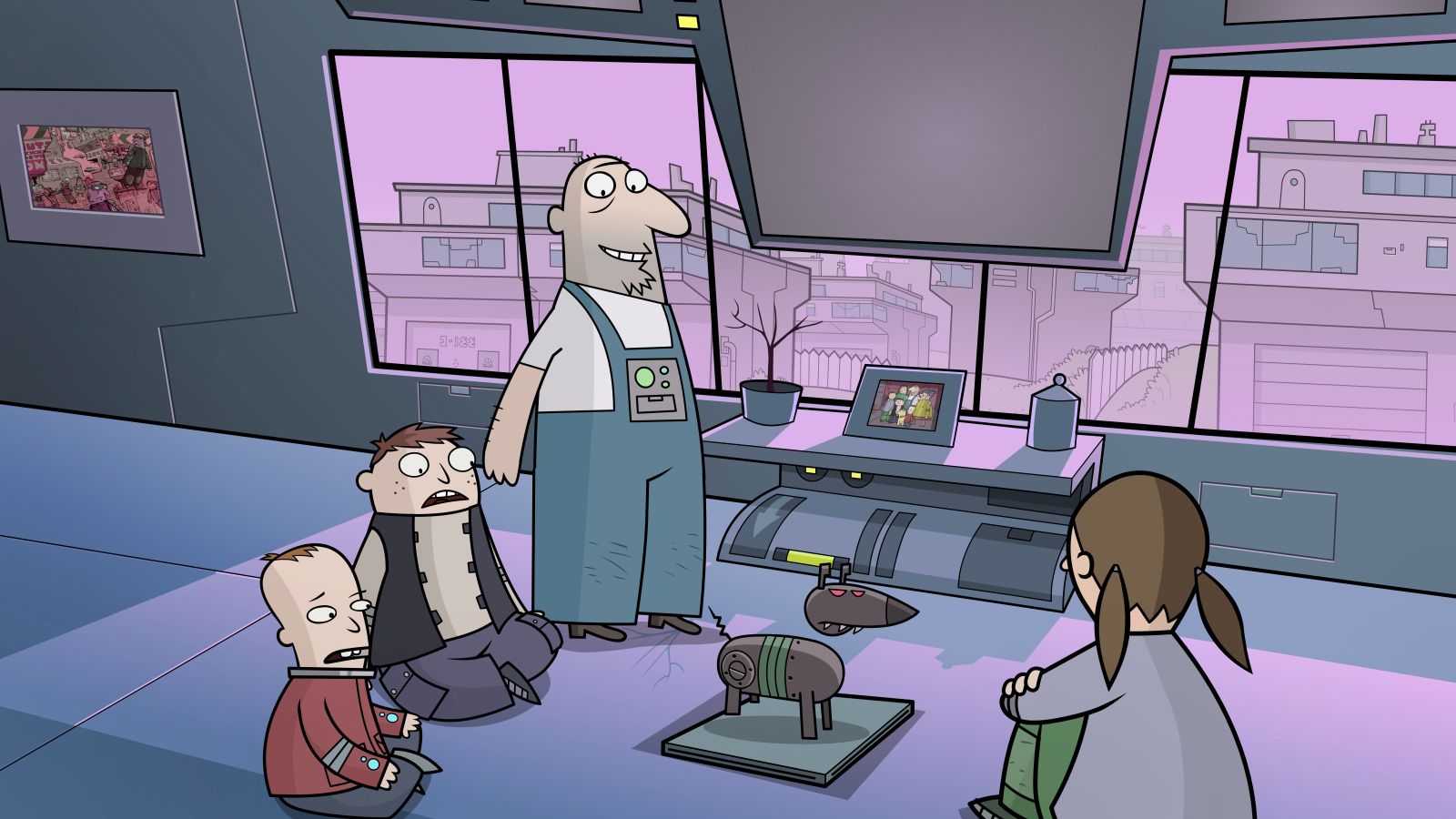